Saltwater Intrusion in the Upper Tagus Estuary during Droughts

Managing the Agri-Food System of Watersheds to Combat Coastal Eutrophication: A Land-to-Sea Modelling Approach to the French Coastal English Channel

The continental coastal waters of the Eastern Channel, from Normandy to Hauts-de-France, are subject to the major influence of unbalanced nutrient inputs from inflowing rivers. Several episodes of harmful algal blooms (HABs) compromising fishing and shellfish farming activities have been observed at the coast. For a better understanding of how the land-to-sea aquatic continuum functions, the GRAFS-RIVERSTRAHLER river biogeochemical model was implemented to cover the watersheds of 11 rivers flowing into this area (including the Seine) and chained with the ecological marine ECO-MARS3D model, applied to the French Northern coastal zone. Human activities strongly impact on the functioning of coastal ecosystems. Specifically, for these fertile soils of Northern France, intensive agricultural nitrogen (N) deliveries in excess over silica (Si) and phosphorus (P), essentially of diffuse origin, are potentially responsible for coastal eutrophication. Phosphorous is today equally supplied by diffuse and point sources, after a drastic reduction of inputs from wastewater treatment plants since the 2000s, and is better balanced regarding Si, as shown by the indicators of coastal eutrophication potential (P-ICEP versus N-ICEP). However, despite this drastic P reduction, HABs still appear repeatedly. Exploration of several scenarios of agro-food chain reorganization shows that (i) further progress in urban wastewater treatment to fully comply with current European regulations will not result in a significant reduction of nutrient fluxes to the sea, hence including HABs, and (ii) radical structural changes in agriculture, based on generalization of long and diversified organic crop rotations, reconnection of crop and livestock farming and changes in the human diet have the capacity to significantly reduce nutrient flows, coastal eutrophication and HABs. View Full-Text
Keywords: toxic microalgae; Pseudo-nitzschia spp.; river basins; nutrient flows; scenarios; coastal zone ecosystem; modelling toxic microalgae; Pseudo-nitzschia spp.; river basins; nutrient flows; scenarios; coastal zone ecosystem; modelling
►▼ Show Figures 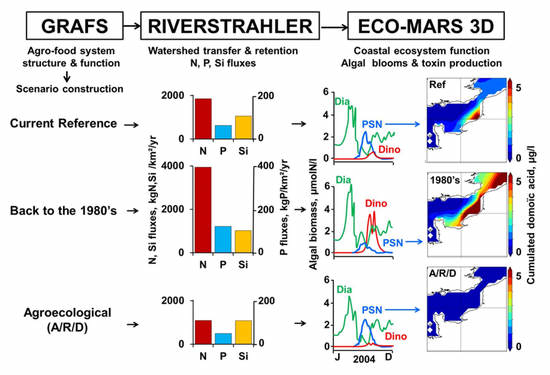