Topographic Effects in Geoid Determinations
Next Article in Special Issue

After the M = 7.0 Haiti earthquake in 2010, many teams completed seismic risk studies in Port-au-Prince to better understand why this not extraordinarily strong event had induced one of the most severe earthquake disasters in history (at least in the Western World). Most highlighted the low construction quality as the main cause for the disaster, but some also pointed to possible soil and topographic amplification effects, especially in the lower and central parts of Port-au-Prince (e.g., close to the harbor). However, very detailed local studies of such site effects have not been completed yet. A Belgian-Haitian collaboration project was established in order to develop a detailed local seismic hazard study for Gros-Morne hill located in the district of Pétion-Ville, southeast of Port-au-Prince. In order to have a better understanding of the amplification on the Gros-Morne hill, in the southeastern part of Port-au-Prince, site effects were investigated by using near surface geophysical methods. The horizontal to vertical spectral ratio technique was applied to ambient vibrations and earthquake data, and multichannel analysis of surface waves and P-wave refraction tomography calculation were applied to seismic data. Standard spectral ratios were computed for the S-wave windows of the earthquake data recorded by a small temporary seismic network. Electrical resistivity tomography profiles were also performed in order to image the structure of the subsurface and detect the presence of water, if any. The spectral ratio results generally show low to medium (1.5–6) resonance amplitudes at one or several different resonance frequencies (for the same site), between 0.5 and 25 Hz. At most of the investigated sites, the fundamental resonance frequency varies between 7 and 10 Hz. By using the multichannel surface wave analyses of the seismic data, we were able to determine shear wave velocities ranging between 200 and 850 m/s, up to a depth of about 15–20 m. From the refraction analysis, we were able to delineate P-waves velocities of 500 to 1500–2000 m/s at the studied sites. The outputs were locally compared with the resistivity data from the electrical profiles. Thus, the overall data indicate a moderate site effect at Gros-Morne hill, with a great variability in site amplification distribution. Initial estimates of local site effects were made on the basis of those outputs and the earthquake recordings. Our results are finally discussed with respect to outputs and interpretations that had been published earlier for the same site. Those results only partly confirm the strong seismic amplification effects highlighted by previous papers for this hill site, which had been explained by the effects of the local topographic and soil characteristics. View Full-Text
Keywords: electrical and seismic measurements; ambient vibrations; earthquake recordings; topographic amplification; soil characteristics; reference site; source-path-site effects electrical and seismic measurements; ambient vibrations; earthquake recordings; topographic amplification; soil characteristics; reference site; source-path-site effects
►▼ Show Figures 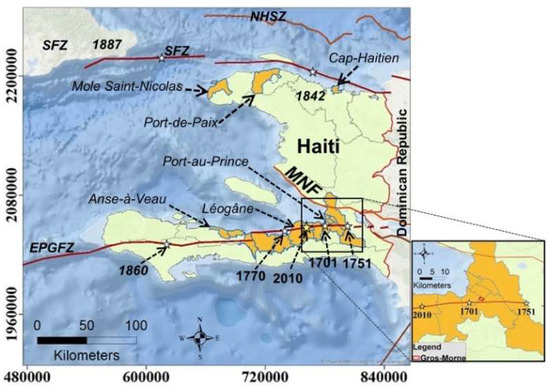