Ground Deformation and Seismic Fault Model of the M6.4 Durres (Albania) Nov. 26, 2019 Earthquake, Based on GNSS/INSAR Observations
Next Article in Special Issue

2D Runout Modelling of Hillslope Debris Flows, Based on Well-Documented Events in Switzerland

One-dimensional (1D) numerical models generally provide reliable results when applied to simulate river hydraulics and morphodynamics upstream of the tidal influence, given the predominantly unidirectional flow conditions. Such models, however, can also be used to reproduce river hydraulics across the fluvial to marine transition zone when specific conditions occur, as during high discharge events, and the results obtained via these simple modeling tools can provide indicative trends that may guide more structured and detailed modeling of a particularly critical area. In this study, the application of a 1D model setup with hydrologic engineering centers river analysis system (HEC-RAS) for simulating the hydro-morphodynamic conditions of a distributary channel of the Po River Delta (Italy) during a flooding event that occurred in Spring 2009 is presented. The channel bathymetry and the grainsize composition was taken from field measurements, while the dimension of the plume offshore the delta was derived from a MODIS image acquired at the peak of the flood. The comparison between the numerical outcomes and the field evidence shows the reliability of the proposed 1D modeling approach in representing the delta dynamics at a large scale, as well as in showing locations where more spatially detailed studies are needed. The code was also able to adequately reproduce the channel hydro-morphodynamics and the sediment data as derived from a core sample taken a few km offshore during the flooding event of April–May 2009. Through a sensitivity analysis, it is also proven that the dimension of the river plume can influence the evolution of the prodelta, while having a rather negligible effect inland, because of the major stresses induced by the high river discharge during the flood event. View Full-Text
Keywords: distributary channel; Hec-Ras modeling; Po River; tidal influence; river hydro-morphodynamics distributary channel; Hec-Ras modeling; Po River; tidal influence; river hydro-morphodynamics
►▼ Show Figures 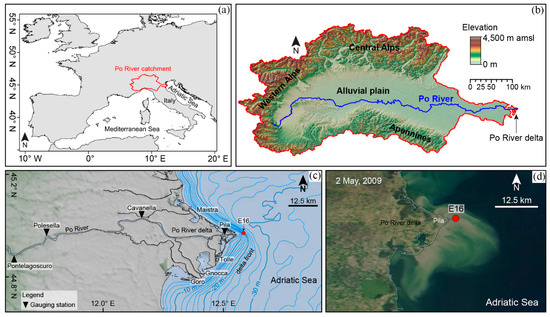 Nones, M.; Maselli, V.; Varrani, A. Numerical Modeling of the Hydro-Morphodynamics of a Distributary Channel of the Po River Delta (Italy) during the Spring 2009 Flood Event. Geosciences 2020, 10, 209.


Nones M, Maselli V, Varrani A. Numerical Modeling of the Hydro-Morphodynamics of a Distributary Channel of the Po River Delta (Italy) during the Spring 2009 Flood Event. Geosciences. 2020; 10(6):209.


Nones, Michael; Maselli, Vittorio; Varrani, Arianna. 2020. "Numerical Modeling of the Hydro-Morphodynamics of a Distributary Channel of the Po River Delta (Italy) during the Spring 2009 Flood Event." Geosciences 10, no. 6: 209.