Recent Advances in Geomathematics in Croatia: Examples from Subsurface Geological Mapping and Biostatistics
Next Article in Special Issue

The Discovery of the Theater of Akragas (Valley of Temples, Agrigento, Italy): An Archaeological Confirmation of the Supposed Buried Structures from a Geophysical Survey

Montenegro is a land of great history which needs attention and care for a deeper knowledge and its making at the disposal of new generations. It is still a territory to be discovered, studied, and disclosed. It is important to understand how much hidden heritage there is still in this area to explore and exploit, but on the other hand, how much known heritage exists to protect and monitor, preventing its destruction and loss. In this context, Montenegro is heavily investing in the management of cultural heritage through initiatives for identification, protection, preservation, enhancement and fruition of them. In the frame of the knowledge, the use of non-destructive geophysical methods can be helpful for a cognitive investigation immediately in the bud of any archaeological verification project, safeguarded through preventive archaeology operations and the exploration of large areas within archaeological parks. In this paper, the results of geophysical prospections at the Hellenistic-Illyrian site of Mjace, the roman towns of Doclea and Municipium S, the medieval city of Svač, and the Stećci medieval tombstones graveyards of Novakovići, Žugića, and Plužine are presented. The study allowed the reconnaissance of new buried structures in the soil and has provided an updated view of the rich archaeological heritage of Montenegro. View Full-Text
Keywords: Montenegro; archaeological heritage; ground penetrating radar; electrical resistivity tomography Montenegro; archaeological heritage; ground penetrating radar; electrical resistivity tomography
►▼ Show Figures 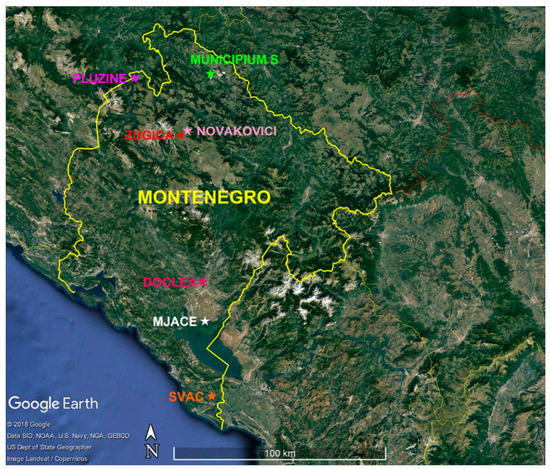