Effect of a Synbiotic Mix on Intestinal Structural Changes, and Salmonella Typhimurium and Clostridium Perfringens Colonization in Broiler Chickens
Next Article in Special Issue

Cytogenetic Analyses in Ewes with Congenital Abnormalities of the Genital Apparatus

The disorders of sex development (DSDs) are congenital conditions characterized by inconsistency among chromosomal, gonadal, and anatomical sex development. Reproduction and prolificacy are two main parameters in the sheep industry; thus, DSDs in sheep are very detrimental. Interestingly, no DSDs-associated gene mutations have been reported in sheep so far, probably due to the fact that affected animals are not detected and studied. With the aim to deepen the knowledge about DSDs in sheep and improve diagnostic tools, screening of a sheep farm aimed to detect and study DSDs in ovine species has been started, and the actual findings relative to the first two sheep flocks analysed are reported here. In our opinion, this study demonstrates that, despite the low number of studies on ovine DSDs, if compared with other species, this problem is actually present and needs more attention.

The Disorders of Sex Development (DSDs) are congenital conditions characterized by inconsistency among chromosomal, gonadal, and anatomical sex development. The aim of this research is to report the clinical and cytogenetic findings of four DSD cases and 13 couples of heterosexual twins in sheep. To this purpose, C- and R-banding techniques were used, and the analyses of the SRY (Sex Determining Region Y) and AMEL (Amelogenin) genes were carried out. Moreover, morphopathological analyses were performed in one case. The four DSD sheep cases were registered as females at birth, and for none of them it was possible to establish whether the subjects were born from heterosexual multiple births. Three of the four cases were diagnosed as XX/XY blood lymphocyte chimaeras, while the fourth case was diagnosed as a 54, XY SRY-positive DSD sheep. None of the heterosexual twins showed XX/XY blood chimaerism. This finding suggests that the blood chimaeric cases detected could also be due to a zygote/embryo fusion. Moreover, no gene variants involved in sheep DSD are known, the identification of which would be very useful for the sheep industry. View Full-Text
Keywords: ewe; disorder of sex development (DSD); XX/XY cell chimaerism ewe; disorder of sex development (DSD); XX/XY cell chimaerism
►▼ Show Figures 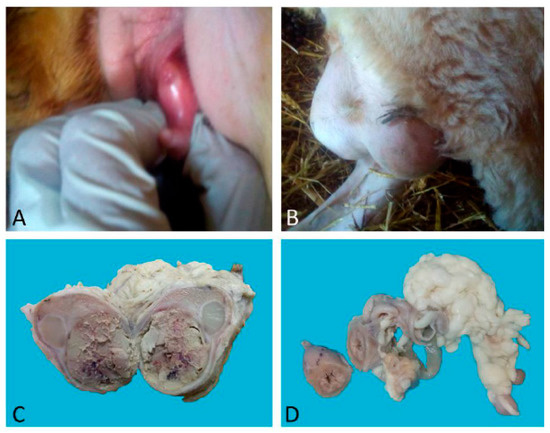