The objectives of this experiment were to investigate the effects of adding corn DDGS to the dairy cow diet as well as the bedding types (wood shavings, straw or peat moss) on manure fugitive CH4 emissions. The incorporation of DDGS in the diet has increased manure methane emission by 15% and the use of peat moss as bedding has increased manure methane emission by 27%.

The specific objectives of this experiment were to investigate the effects of adding 10% or 30% corn dried distillers grains with solubles (DDGS) to the dairy cow diet and the effects of bedding type (wood shavings, straw or peat moss) in dairy slurry on fugitive CH4 emissions. The addition of DDGS10 to the dairy cow diet significantly increased (29%) the daily amount of fat excreted in slurry compared to the control diet. The inclusion of DDGS30 in the diet increased the daily amounts of excreted DM, volatile solids (VS), fat, neutral detergent fiber (NDF), acid detergent fiber (ADF) and hemicellulose by 18%, 18%, 70%, 30%, 15% and 53%, respectively, compared to the control diet. During the storage experiment, daily fugitive CH4 emissions showed a significant increase of 15% (p < 0.05) for the slurry resulting from the corn DDGS30 diet. The addition of wood shavings and straw did not have a significant effect on daily fugitive CH4 emissions relative to the control diet, whereas the addition of peat moss caused a significant increase of 27% (p < 0.05) in fugitive CH4 emissions. View Full-Text
Keywords: beddings; corn DDGS; dairy; manure; methane; storage beddings; corn DDGS; dairy; manure; methane; storage
►▼ Show Figures 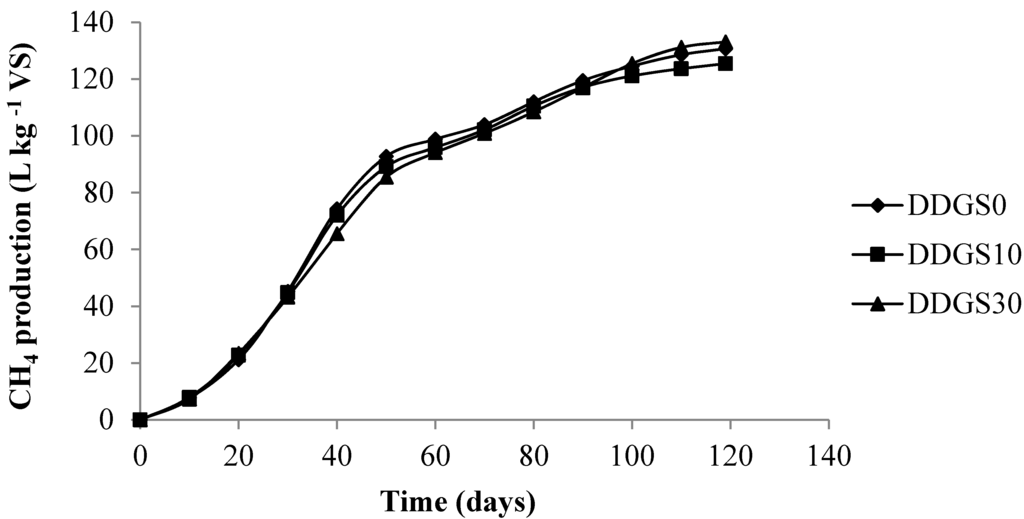