Reports of behavioral signs, such as blindness and circling in free-ranging moose from different parts of the world, have spurred comprehensive pathological investigation to find the causes of the disease that have clinical relevance. In this case study, brains collected from two adult free-ranging moose (Alces alces) cows that were seemingly blind and found walking in circles were examined by light and electron microscopy with further ancillary testing. Here, we report for the first time Lafora disease and alpha-synucleinopathy in two wild free-ranging moose cows who presented with abnormal behavior and blindness, with similar neuronal polyglucosan body (PGB) accumulations identified in humans and other animals. Microscopic analysis of the hippocampus of brain revealed inclusion bodies resembling PGBs (Lafora disease) in the neurons with ultrastructural findings of aggregates of branching filaments, consistent with polyglucosan bodies. Furthermore, α-synuclein immunopositivity was noted in the hippocampus, with accumulations of small granules ultrastructurally distinct from PGBs and morphologically compatible with alpha-synucleinopathy (Lewy body). The apparent blindness found in these moose could be related to an injury associated with secondary bacterial invasion; however, an accumulation of neurotoxicants (PGBs and α-synucleins) in retinal ganglion cells could also be the cause. Lafora disease and alpha-synucleinopathy were considered in the differential diagnosis of the young adult moose who presented with signs of blindness and behavioral signs such as circling.

Lafora disease is an autosomal recessive glycogen-storage disorder resulting from an accumulation of toxic polyglucosan bodies (PGBs) in the central nervous system, which causes behavioral and neurologic symptoms in humans and other animals. In this case study, brains collected from two young adult free-ranging moose (Alces alces) cows that were seemingly blind and found walking in circles were examined by light and electron microscopy. Microscopic analysis of the hippocampus of the brain revealed inclusion bodies resembling PGBs in the neuronal perikaryon, neuronal processes, and neuropil. These round inclusions measuring up to 30 microns in diameter were predominantly confined to the hippocampus region of the brain in both animals. The inclusions tested α-synuclein-negative by immunohistochemistry, α-synuclein-positive with PAS, GMS, and Bielschowsky’s staining; and diastase-resistant with central basophilic cores and faintly radiating peripheral lines. Ultrastructural examination of the affected areas of the hippocampus showed non-membrane-bound aggregates of asymmetrically branching filaments that bifurcated regularly, consistent with PGBs in both animals. Additionally, α-synuclein immunopositivity was noted in the different regions of the hippocampus with accumulations of small granules ultrastructurally distinct from PGBs and morphologically compatible with alpha-synucleinopathy (Lewy body). The apparent blindness found in these moose could be related to an injury associated with secondary bacterial invasion; however, an accumulation of neurotoxicants (PGBs and α-synuclein) in retinal ganglions cells could also be the cause. This is the first report demonstrating Lafora disease with concurrent alpha-synucleinopathy (Lewy body neuropathy) in a non-domesticated animal. View Full-Text
Keywords: moose; circling; blindness; Lafora disease; polyglucosan bodies; Lewy body; synucleinopathies; α-Synuclein moose; circling; blindness; Lafora disease; polyglucosan bodies; Lewy body; synucleinopathies; α-Synuclein
►▼ Show Figures 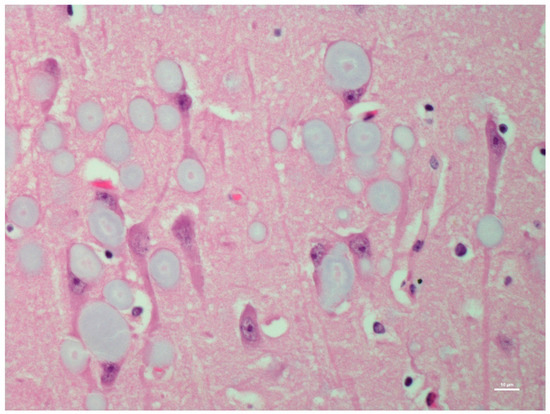