In order to obtain accurate infrared predictions, a large number of training animals are needed, aiming to increase the predictive ability of Fourier-transform infrared (FTIR) predictions. In this study, we compared different validation scenarios that involved combining specialized and dual-purpose dairy breeds in the training population FTIR predictions for three different phenotypes in the major cattle breed, i.e., Holstein cattle. Results show that the design of the training population is an important factor in improving predictive ability in the Holstein breed with potential implications also for the minor breeds. However, this improvement is limited by the phenotypic variability of traits of concern and spectral variability between the training and validation sets and the number of animals in the training population.

In general, Fourier-transform infrared (FTIR) predictions are developed using a single-breed population split into a training and a validation set. However, using populations formed of different breeds is an attractive way to design cross-validation scenarios aimed at increasing prediction for difficult-to-measure traits in the dairy industry. This study aimed to evaluate the potential of FTIR prediction using training set combining specialized and dual-purpose dairy breeds to predict different phenotypes divergent in terms of biological meaning, variability, and heritability, such as body condition score (BCS), serum β-hydroxybutyrate (BHB), and kappa casein (k-CN) in the major cattle breed, i.e., Holstein-Friesian. Data were obtained from specialized dairy breeds: Holstein (468 cows) and Brown Swiss (657 cows), and dual-purpose breeds: Simmental (157 cows), Alpine Grey (75 cows), and Rendena (104 cows), giving a total of 1461 cows from 41 multi-breed dairy herds. The FTIR prediction model was developed using a gradient boosting machine (GBM), and predictive ability for the target phenotype in Holstein cows was assessed using different cross-validation (CV) strategies: a within-breed scenario using 10-fold cross-validation, for which the Holstein population was randomly split into 10 folds, one for validation and the remaining nine for training (10-fold_HO); an across-breed scenario (BS_HO) where the Brown Swiss cows were used as the training set and the Holstein cows as the validation set; a specialized multi-breed scenario (BS+HO_10-fold), where the entire Brown Swiss and Holstein populations were combined then split into 10 folds, and a multi-breed scenario (Multi-breed), where the training set comprised specialized (Holstein and Brown Swiss) and dual-purpose (Simmental, Alpine Grey, and Rendena) dairy cows, combined with nine folds of the Holstein cows. Lastly a Multi-breed CV2 scenario was implemented, assuming the same number of records as the reference scenario and using the same proportions as the multi-breed. Within-Holstein, FTIR predictions had a predictive ability of 0.63 for BCS, 0.81 for BHB, and 0.80 for k-CN. Using a specific breed (Brown Swiss) as the training set for prediction in the Holstein population reduced the prediction accuracy by 10% for BCS, 7% for BHB, and 11% for k-CN. Notably, the combination of Holstein and Brown Swiss cows in the training set increased the predictive ability of the model by 6%, which was 0.66 for BCS, 0.85 for BHB, and 0.87 for k-CN. Using multiple specialized and dual-purpose animals in the training set outperforms the 10-fold_HO (standard) approach, with an increase in predictive ability of 8% for BCS, 7% for BHB, and 10% for k-CN. When the Multi-breed CV2 was implemented, no improvement was observed. Our findings suggest that FTIR prediction of different phenotypes in the Holstein breed can be improved by including different specialized and dual-purpose breeds in the training population. Our study also shows that predictive ability is enhanced when the size of the training population and the phenotypic variability are increased. View Full-Text
Keywords: dual-purpose dairy breed; Fourier-transform infrared; specialized dairy breed; validation strategies dual-purpose dairy breed; Fourier-transform infrared; specialized dairy breed; validation strategies
►▼ Show Figures 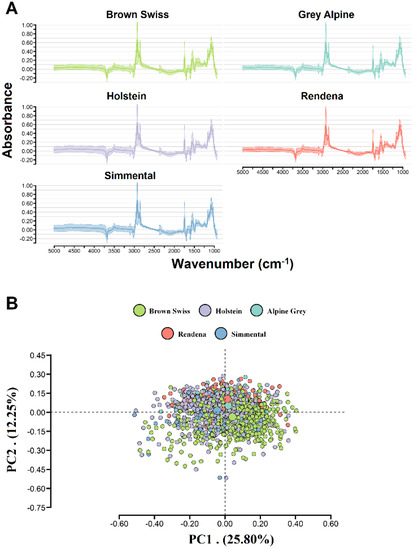