Influence of Supplementation of Lactoferrin, Melittin and Cecropin A to Rat Diet on Changes in Faecal Ammonia Concentrations, Short-Chain Fatty Acid Concentrations and Activities of Bacterial Enzymes

In the present study conducted on Wistar laboratory rats, the effects of two selected insect antimicrobial peptides (AMPs), melittin and cecropin A, were investigated and compared to those attributed to well-known antibacterial action of lactoferrin. It was hypothesised that the dietary presence of lactoferrin, melittin or cecropin A strongly affects the rat large gut microbial activity at the time of protein/peptide administration and the durability of the effects may differ after their withdrawal from a diet. The experiment was conducted on living animals (without their euthanasia) and the dynamics of changes in pH, microbial enzyme activity, ammonia and short-chain fatty acids concentrations were investigated in the faeces during and after the dietary treatments with lactoferrin, melittin or cecropin A. The results suggested that the faecal intensity of microbial fermentation processes in rats was quickly reduced upon dietary addition of two AMPs and lactoferrin after two days of treatment, on average. The strongest suppression effect was observed on the 5th day of treatment and persisted on days 5–8. The changes caused by the supplemented lactoferrin and AMPs were reversible after 15 days, i.e., 10 days after the withdrawal of lactoferrin, melittin and cecropin A from the diet.

We hypothesised that the dietary addition of the bioactive antimicrobial protein lactoferrin (LF) and peptides melittin (MT) or cecropin A (CR) at a dosage of 100 mg/kg to the diet of Wistar rats would result in strong modulatory effects on faecal microbial enzymatic activity, short-chain fatty acid and ammonia concentrations. To date, the changes in bacterial extracellular and intracellular enzymatic activities upon addition of dietary AMPs have not yet been studied. This experiment lasted 15 days; during the first 5 day period, the rats were fed the control diet (S) and diets supplemented with LF, MT or CR. On days 6–15, all rats were fed the control S diet. The faecal fermentation processes were substantially stopped after two days of treatment, on average, in all rats receiving LF and two AMPs. The deepest suppression effect was observed on the last day of treatment (day 5) and persisted through days 5–8. The highest decreases in faecal bacterial β-glucosidase and β-glucuronidase activities as well as in SCFA and ammonia concentrations were observed in the rats fed the CR diet. Only in the CR animals did the mechanism of suppressed microbial fermentation involve diminished enzyme release from bacterial cells to the digesta. View Full-Text
Keywords: antimicrobial peptides; melittin; cecropin A; lactoferrin; faeces; bacterial enzymes; short-chain fatty acids; ammonia; rat antimicrobial peptides; melittin; cecropin A; lactoferrin; faeces; bacterial enzymes; short-chain fatty acids; ammonia; rat
►▼ Show Figures 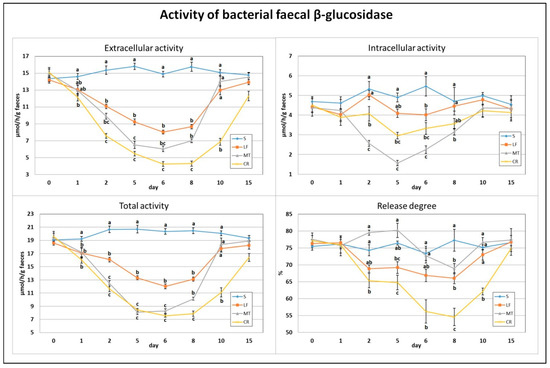