Indoors or Outdoors? An International Exploration of Owner Demographics and Decision Making Associated with Lifestyle of Pet Cats
Previous Article in Journal

Correct identification of mastitis-causing pathogens is key in lactating dairy cattle as management decisions depend on correct diagnoses. One of the most concerning pathogens is Staphylococcus aureus. In simple laboratory set-ups, presumptive identification is performed by assessing the bacterial colonies’ physical characteristics. In the absence of notable characteristics, isolates are deemed to be non-aureus isolates. Over a decade, however, it became evident that S. aureus identifications may be incorrect as further testing was performed on milk and mammary secretion samples. This short report details the laboratory findings from isolates collected on a Georgia dairy farm over a 10-year period. Almost 64% of isolates that were deemed to be non-aureus isolates were actually identified as S. aureus. Just over 26% were correctly identified. This communication is a cautionary tale to laboratories, but especially dairy producers performing simple on-farm microbiological procedures. Further testing or more advanced testing may need to be performed to develop appropriate control, prevention, and treatment plans.

Staphylococcus aureus is one of the most concerning mastitis-causing pathogens in dairy cattle. Using basic microbiological techniques, S. aureus is typically identified by colony characteristics and hemolysis on blood agar where isolates without hemolysis are typically considered to be coagulase-negative staphylococci (CNS) isolates. Herein, we present a decade-long case study where suspected S. aureus isolates from one Georgia dairy farm were further tested to confirm presumptive identification. Presumptive identification of bacterial growth from 222 mammary secretions from bred Holstein heifers and lactating cows was conducted at the time of collection. Presumptive identification of S. aureus on blood agar was based on observation of colony morphology, color, and presence or absence of a broad zone of incomplete hemolysis and a smaller zone of complete hemolysis at 48 h. Those without hemolysis were presumptively characterized as CNS. All isolates were further plated on mannitol salt agar and a coagulase test was performed. A positive for both of these tests together was deemed to be S. aureus. A selection of isolates was tested using API® Staph to biochemically confirm S. aureus identification. Data showed that 63.96% of isolates presumed to be CNS isolates were identified as S. aureus, 9.46% of isolates presumed to be CNS isolates were identified as coagulase-positive staphylococci (CPS) species (but not S. aureus), and 26.58% of samples that were presumed to be CNS isolates were identified correctly. View Full-Text
Keywords: misdiagnosis; Staphylococcus aureus; CNS; NAS; hemolysis misdiagnosis; Staphylococcus aureus; CNS; NAS; hemolysis
►▼ Show Figures 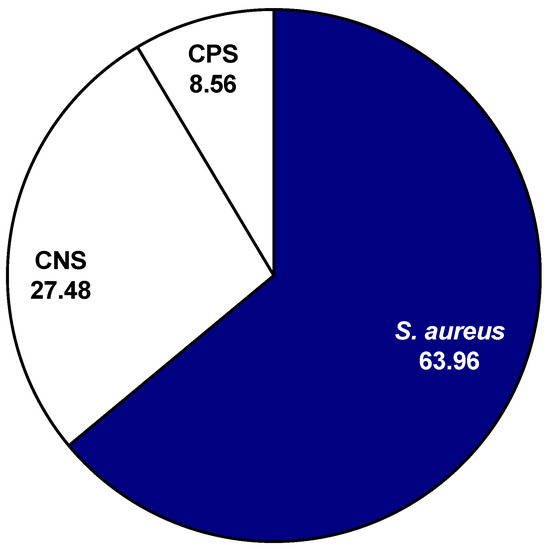