Tecar (energy transfer capacitive and resistive) is commonly used in dog rehabilitation as it can accelerate the healing process. Few studies have aimed to understand its effects on superficial tissues of the treated anatomic region. The aim of this study was to monitor by thermal camera the heating effects induced by Tecar on the surface of the region of application. The investigation was conducted on six dogs referred for Tecar therapy to treat muscle contractures (three dogs) or osteoarthritis (three dogs). Thermographic images and relative measurements were obtained by each region immediately before (T0), at conclusion (T1), and sixty seconds after the Tecar application (T2). Statistically significant differences were detected for mean temperature between T0 (32.42 ± 1.57 °C) and T1 (33.36 ± 1.17 °C) (p = 0.040) and between T1 and T2 (32.83 ± 1.31 °C) (p = 0.031).

Thermography is a non-invasive diagnostic method commonly used to monitor changes of the body surface temperature potentially induced by different conditions such as fever, inflammation, trauma, or changes of tissue perfusion. Capacitive-resistive diathermy therapy (such as energy transfer capacitive and resistive—Tecar) is commonly used in rehabilitation due to its diathemic effect secondary to blood circulation increase that could accelerate the healing process. The aim of this study was to monitor by thermal camera the diathermic effects induced by Tecar on the surface of the region of application. The investigation was conducted on six dogs referred for Tecar therapy to treat muscle contractures (three dogs) or osteoarthritis (three dogs). Eleven anatomical treated regions were recorded. Thermographic images and relative measurements were obtained by each region immediately before (T0), at conclusion (T1), and sixty seconds after the Tecar application (T2). Data were recorded and statistically analyzed. A comparison of temperature differences (maximum, minimum and mean values) between T0 and T1, T0 and T2, and T1 and T2 was performed by ANOVA test with Bonferroni post hoc (p ≤ 0.05). Statistically significant differences were detected for mean temperature between T0 (32.42 ± 1.57 °C) and T1 (33.36 ± 1.17 °C) (p = 0.040) and between T1 and T2 (32.83 ± 1.31 °C) (p = 0.031). Furthermore, there was no significant difference between the mean temperature at T0 and T2, demonstrating that superficial diathermic effect exhausted within 60 s. View Full-Text
Keywords: thermography; Tecar; superficial temperature; rehabilitation; dog thermography; Tecar; superficial temperature; rehabilitation; dog
►▼ Show Figures 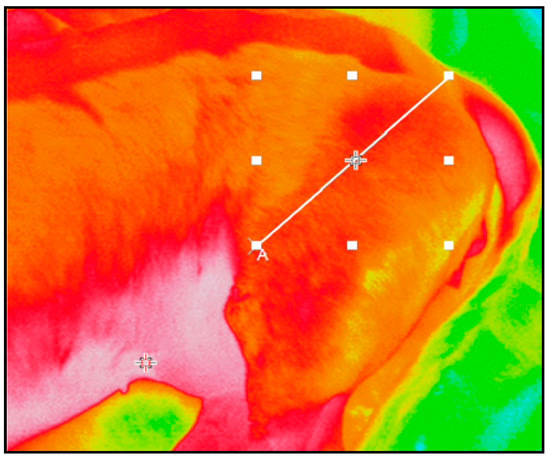