The Potential of Human–Horse Attachment in Creating Favorable Settings for Professional Care: A Study of Adolescents’ Visit to a Farm
Previous Article in Journal

Human–horse interaction, such as attachment and bonding behavior, is particularly important during repeated equine-assisted activities (EAA). This bond needs to be reliable, positive, and reciprocal to create a secure human–horse attachment and achieve improvements in EAA participants. This study aims to determine the effect of the attachment style (AS) of at-risk adolescents on the physiology and behavior of therapy horses during a 10-week EAA. Adolescents completed a questionnaire to determine their AS before starting the program. Horse response during the EAA was recorded, looking at horse heart rate and behaviour (the occurrence of affiliative and avoidance behaviours). Adolescents’ AS affected horse affiliative behaviour during grooming, and horse heart rate and avoidance behaviour during riding. The results indicate that horse welfare was not threatened during the EAA with at-risk adolescents. Over time, therapy horses showed overall more affiliative behaviour and less variability in their stress response (heart rate and avoidance behaviours) toward insecure AS adolescents during grooming and riding, respectively. These results suggest that insecure AS can positively impact horse response during EAA relative to secure AS in humans. However, the implications of human AS on the functioning of horse–human interaction and its mechanisms are yet unknown. 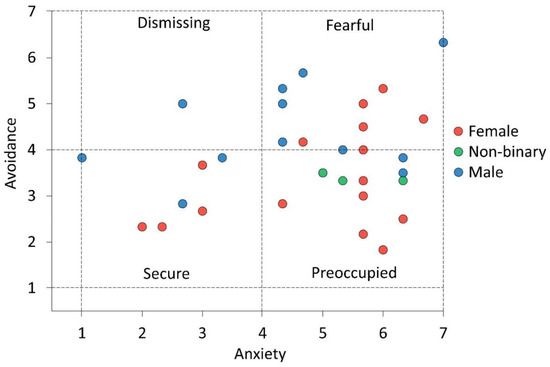