Effect of Acrylamide Supplementation on the CART-, VAChT-, and nNOS-Immunoreactive Nervous Structures in the Porcine Stomach
Previous Article in Journal

Artificial light at night (ALAN) is one of the most extreme environmental alterations in urban areas, which drives nocturnal activity in diurnal species. Feral Pigeon (Columba livia f. domestica), a common species in urban centers worldwide, has been observed foraging at night in urban areas. However, the role of ALAN in the nocturnal activity of this species is unknown. Moreover, studies addressing the relationship between ALAN and nocturnal activity of diurnal birds are scarce in the Southern Hemisphere. The objective of this study is to assess the environmental factors associated with nocturnal activity of the Feral Pigeon in Argentinian cities. Environmental conditions were compared between sites where pigeons were seen foraging and randomly selected sites where pigeons were not recorded foraging. Nocturnal foraging by the Feral Pigeon was recorded in three of four surveyed cities. ALAN was positively related to nocturnal foraging activity in Salta and Buenos Aires. The results obtained suggest that urbanization would promote nocturnal activity in Feral Pigeons. Moreover, nocturnal activity was mainly driven by ALAN, which probably alters the circadian rhythm of pigeons. View Full-Text
Keywords: artificial light at night; circadian rhythm; Columba livia; Latin America; noise; temporal homogenization artificial light at night; circadian rhythm; Columba livia; Latin America; noise; temporal homogenization
►▼ Show Figures 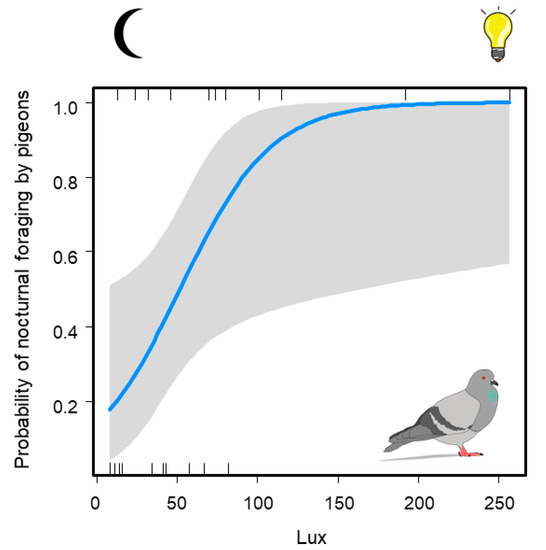