Not in My Backyard: Public Perceptions of Wildlife and ‘Pest Control’ in and around UK Homes, and Local Authority ‘Pest Control’
Previous Article in Journal

Horses Failed to Learn from Humans by Observation

The behavior of animals can be altered in various ways. Horses interact on an everyday basis with humans, and some studies suggest that horses can learn new behavior from observing humans. However, scientific findings are conflicting. This study seeks to investigate if horses can learn to solve an instrumental task of opening a box, by observing human demonstration. We control for social transmission mechanisms, which require lower cognitive complexity than actual social learning. One human demonstrator either (A) fully demonstrated how to solve the task, (B) partially demonstrated the task, or (C) provided no demonstration. Thirty horses were randomly assigned to one of these treatments, and their success and behavior was observed. Horses watching the full and partial demonstrations were not more successful in solving the task than horses receiving no human demonstration. Horses that were unsuccessful showed more human- and box-oriented behavior than successful horses, which can indicate motivation to solve the task and/or frustration from being unable to solve the task. Our study suggest that the horses did not benefit from human demonstration of how to open a box to find food.

Animals can acquire new behavior through both individual and social learning. Several studies have investigated horses’ ability to utilize inter-species (human demonstrator) social learning with conflicting results. In this study, we repeat a previous study, which found that horses had the ability to learn from observing humans performing an instrumental task, but we include a control for stimulus enhancement. One human demonstrator and thirty horses were included, and the horses were randomly assigned to one of three treatments: (A) full human demonstration, (B) partial human demonstration, and (C) no human demonstration. The task was for the horses to touch an object situated 1 m away from a feed box, to open this feed box, and thereby obtain a food reward. The success of each horse, the behavior directed towards the apparatus and the human, and behaviors indicative of frustration were observed. The results showed that horses observing a full and partial human demonstration were not more successful in solving the instrumental task than horses not observing any demonstration. Horses that did not solve the task expressed more box- and human-oriented behavior compared to successful horses, which may be an indication of motivation to solve the task and/or frustration from being unable to solve the task. View Full-Text
Keywords: horse; cognition; social learning; welfare; training; social transmission; inter-species horse; cognition; social learning; welfare; training; social transmission; inter-species
►▼ Show Figures 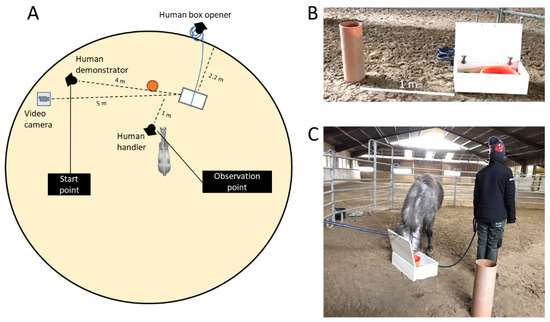