The Development of a Novel Questionnaire Approach to the Investigation of Horse Training, Management, and Behaviour
Previous Article in Journal

Kimberly A. Woodruff
2,* and

United States animal shelters care for unwanted dogs until they are adopted, transferred to another facility, or euthanized. Certain characteristics have been previously studied to determine the adoptability of shelter dogs possessing such traits. However, previous studies are typically limited in sample size, shelter geographic location, and/or the number of shelters participating in the study; these reduce the generalizability of the results. To better understand predicters of shelter dog adoptability, the aim of this study was to identify dog characteristics predictive of adoption. This study helps us understand adopters’ preferences for certain shelter dogs, which may be useful to help shelters increase adoption rates and ultimately reduce shelter dog euthanasia.

The objective of this study was to identify phenotypic characteristics of dogs predictive of adoption after being received into a shelter. Individual dog records for 2017 were requested from shelters in five states that received municipal funding and utilized electronic record keeping methods. Records from 17 shelters were merged into a dataset of 19,514 potentially adoptable dogs. A simple random sample of 4500 dogs was used for modelling. Variables describing coat length, estimated adult size, and skull type were imputed from breed phenotype. A Cox proportional hazard model with a random effect of shelter was developed for the outcome of adoption using manual forward variable selection. Significance for model inclusion was set at alpha = 0.05. Dogs from shelters in the North were more likely to be adopted than dogs from shelters in the South (hazard ratio (HR) = 3.13, 95% C.I. 1.27–7.67), as were dogs from Western shelters versus those from Southern shelters (HR = 3.81, 95% C.I. 1.43–10.14). The effect of estimated adult size, skull type, and age group on adoption were each modified by time in the shelter (p < 0.001). The results of this study indicate that what dogs look like is predictive of their hazard for adoption from shelters, but the effect of some characteristics on hazard for adoption depend on time in the shelter. Further, this study demonstrates that adopters prefer a certain phenotype of shelter dog including those that are puppies, small sized and not brachycephalic, when accounting for time in the sheltering environment. View Full-Text
Keywords: animal shelter; shelter dogs; adoption; adopter preference; United States animal shelter; shelter dogs; adoption; adopter preference; United States
►▼ Show Figures 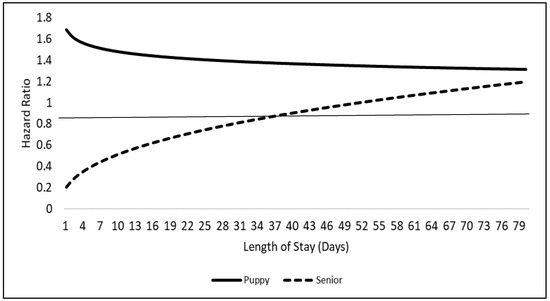