Preventing Colorectal Cancer through Prebiotics
Next Article in Special Issue

The Effect of Probiotics on Health Outcomes in the Elderly: A Systematic Review of Randomized, Placebo-Controlled Studies
Previous Article in Journal

Previously, we demonstrated that the nasal administration of Dolosigranulum pigrum 040417 differentially modulated the respiratory innate immune response triggered by the activation of Toll-like receptor 2 in infant mice. In this work, we aimed to evaluate the beneficial effects of D. pigrum 040417 in the context of Streptococcus pneumoniae infection and characterize the role of alveolar macrophages (AMs) in the immunomodulatory properties of this respiratory commensal bacterium. The nasal administration of D. pigrum 040417 to infant mice significantly increased their resistance to pneumococcal infection, differentially modulated respiratory cytokines production, and reduced lung injuries. These effects were associated to the ability of the 040417 strain to modulate AMs function. Depletion of AMs significantly reduced the capacity of the 040417 strain to improve both the reduction of pathogen loads and the protection against lung tissue damage. We also demonstrated that the immunomodulatory properties of D. pigrum are strain-specific, as D. pigrum 030918 was not able to modulate respiratory immunity or to increase the resistance of mice to an S. pneumoniae infection. These findings enhanced our knowledge regarding the immunological mechanisms involved in modulation of respiratory immunity induced by beneficial respiratory commensal bacteria and suggested that particular strains could be used as next-generation probiotics. View Full-Text
Keywords: respiratory commensal bacteria; upper respiratory tract; next-generation probiotics; Dolosigranulum pigrum; Streptococcus pneumoniae; alveolar macrophages respiratory commensal bacteria; upper respiratory tract; next-generation probiotics; Dolosigranulum pigrum; Streptococcus pneumoniae; alveolar macrophages
►▼ Show Figures 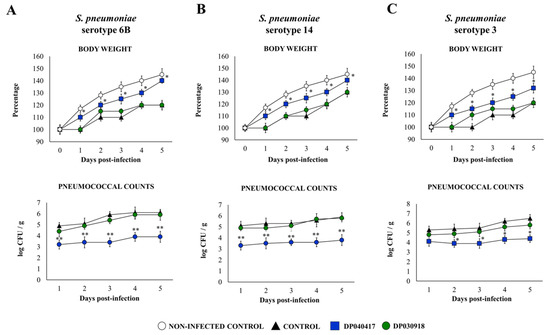