Multi-Drug Resistant Plasmids with ESBL/AmpC and mcr-5.1 in Paraguayan Poultry Farms: The Linkage of Antibiotic Resistance and Hatcheries

Poultry represents a common source of bacteria with resistance to antibiotics including the critically important ones. Selective cultivation using colistin, cefotaxime and meropenem was performed for 66 chicken samples coming from 12 farms in Paraguay while two breeding companies supplied the farms. A total of 62 Escherichia coli and 22 Klebsiella pneumoniae isolates were obtained and representative isolates were subjected to whole-genome sequencing. Relatively high prevalence of phylogenetic group D and F was observed in E. coli isolates and several zoonotic sequence types (STs) including ST457 (14 isolates), ST38 (5), ST10 (2), ST117 (2) or ST93 (4) were detected. Isolates from three farms, which purchased chicken from a Paraguayan hatchery showed higher prevalence of mcr-5.1 and blaCTX-M-8 compared to the other nine farms, which purchased chickens from a Brazilian hatchery. Moreover, none of the K. pneumoniae isolates were linked to the Paraguayan hatchery. ESBL/AmpC and mcr-5-carrying multi-drug resistant (MDR) plasmids were characterized, and complete sequences were obtained for eight plasmids. The study shed light on Paraguayan poultry farms as a reservoir of antibiotic resistance commonly conferred via MDR plasmids and showed linkage between resistance and origin of the chickens at the hatcheries level. View Full-Text
Keywords: ESBL/AmpC; colistin; E. coli; K. pneumoniae; I1 plasmids ESBL/AmpC; colistin; E. coli; K. pneumoniae; I1 plasmids
►▼ Show Figures 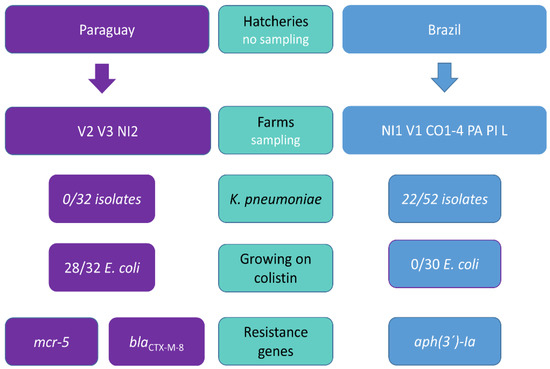