Multi-Drug Resistant Plasmids with ESBL/AmpC and mcr-5.1 in Paraguayan Poultry Farms: The Linkage of Antibiotic Resistance and Hatcheries
Next Article in Special Issue

The surge in mortality and morbidity rates caused by multidrug-resistant (MDR) bacteria prompted a renewal of interest in bacteriophages (phages) as clinical therapeutics and natural biocontrol agents. Nevertheless, bacteria and phages are continually under the pressure of the evolutionary phage–host arms race for survival, which is mediated by co-evolving resistance mechanisms. In Anderson phage typing scheme of Salmonella Typhimurium, the epidemiologically related definitive phage types, DT104 and DT104b, display significantly different phage susceptibility profiles. This study aimed to characterise phage resistance mechanisms and genomic differences that may be responsible for the divergent phage reaction patterns in S. Typhimurium DT104 and DT104b using whole genome sequencing (WGS). The analysis of intact prophages, restriction–modification systems (RMS), plasmids and clustered regularly interspaced short palindromic repeats (CRISPRs), as well as CRISPR-associated proteins, revealed no unique genetic determinants that might explain the variation in phage susceptibility among the two phage types. Moreover, analysis of genes coding for potential phage receptors revealed no differences among DT104 and DT104b strains. However, the findings propose the need for experimental assessment of phage-specific receptors on the bacterial cell surface and analysis of bacterial transcriptome using RNA sequencing which will explain the differences in bacterial susceptibility to phages. Using Anderson phage typing scheme of Salmonella Typhimurium for the study of bacteria-phage interaction will help improving our understanding of host–phage interactions which will ultimately lead to the development of phage-based technologies, enabling effective infection control. View Full-Text
Keywords: S. Typhimurium; DT104; DT104b; prophages; RMS; CRISPRs S. Typhimurium; DT104; DT104b; prophages; RMS; CRISPRs
►▼ Show Figures 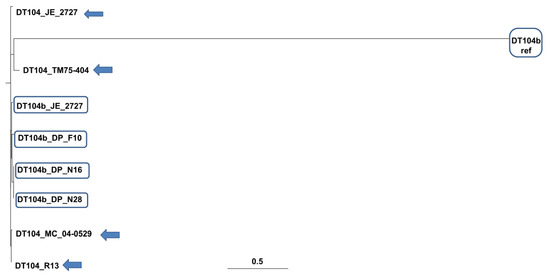