The Gut Microbiome Feelings of the Brain: A Perspective for Non-Microbiologists
Previous Article in Special Issue

Reply to the Comment on “Melanisation of Aspergillus terreus—Is Butyrolactone I Involved in the Regulation of Both DOPA and DHN Types of Pigments in Submerged Culture? Microorganisms 2017, 5, 22”

Craig B. Faulds
1 and

Rapeseed meal is a cheap and abundant raw material, particularly rich in phenolic compounds of biotechnological interest. In this study, we developed a two-step bioconversion process of naturally occurring sinapic acid (4-hydroxy-3,5-dimethoxycinnamic acid) from rapeseed meal into canolol by combining the complementary potentialities of two filamentous fungi, the micromycete Aspergillus niger and the basidiomycete Neolentinus lepideus. Canolol could display numerous industrial applications because of its high antioxidant, antimutagenic and anticarcinogenic properties. In the first step of the process, the use of the enzyme feruloyl esterase type-A (named AnFaeA) produced with the recombinant strain A. niger BRFM451 made it possible to release free sinapic acid from the raw meal by hydrolysing the conjugated forms of sinapic acid in the meal (mainly sinapine and glucopyranosyl sinapate). An amount of 39 nkat AnFaeA per gram of raw meal, at 55 °C and pH 5, led to the recovery of 6.6 to 7.4 mg of free sinapic acid per gram raw meal, which corresponded to a global hydrolysis yield of 68 to 76% and a 100% hydrolysis of sinapine. Then, the XAD2 adsorbent (a styrene and divinylbenzene copolymer resin), used at pH 4, enabled the efficient recovery of the released sinapic acid, and its concentration after elution with ethanol. In the second step, 3-day-old submerged cultures of the strain N. lepideus BRFM15 were supplied with the recovered sinapic acid as the substrate of bioconversion into canolol by a non-oxidative decarboxylation pathway. Canolol production reached 1.3 g/L with a molar yield of bioconversion of 80% and a productivity of 100 mg/L day. The same XAD2 resin, when used at pH 7, allowed the recovery and purification of canolol from the culture broth of N. lepideus. The two-step process used mild conditions compatible with green chemistry. View Full-Text
Keywords: Aspergillus niger; canolol; feruloyl esterase; Neolentinus lepideus; rapeseed meal; sinapic acid Aspergillus niger; canolol; feruloyl esterase; Neolentinus lepideus; rapeseed meal; sinapic acid
►▼ Show Figures 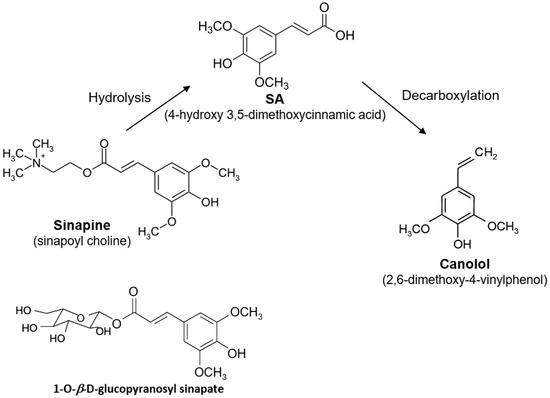