Analysis of Porcine Pro- and Anti-Inflammatory Cytokine Induction by S. suis In Vivo and In Vitro
Previous Article in Journal

Senecavirus A (SVA), an emerging infectious disease, is associated with the porcine idiopathic vesicular disease. Here, the pathogenesis of different strains of SVA was investigated in growing-finishing pigs. We aimed to evaluate the replication characteristics, virus particle morphology, clinical signs, and vesicular lesions in comparison with two different strains of SVA. The animals were infected with SVA HB-CH-2016 or CH/AH-02/2017 by intranasal routes (3 mL, 109TCID50/mL) and monitored daily for 14 days post-inoculation (dpi) for clinical signs and vesicular lesions. Viremia or viral shedding was detected in the blood, fecal swab, and nasal swab samples. Results showed no distinct differences in plaque size, replication ability, and characteristic virions between SVA HB-CH-2016 and CH/AH-02/2017 strains. Animal experimental results showed that both SVA CH/AH-02/2017 and SVA HB-CH-2016 could infect pigs. However, an obvious difference in the pathogenicity and dynamics of infection was observed between SVA HB-CH-2016 and CH/AH-02/2017 strains. The pathogenesis of SVA CH/AH-02/2017 was similar to that of published results of USA strains, whereas the SVA HB-CH-2016 strain had low pathogenicity to pigs. Clinical signs and vesicular lesions were observed in SVA CH/AH-02/2017-infected pigs. Additionally, the different branches of SVA should be capable of inducing broad cross-reactive neutralizing antibodies, which play an important role in clearing the SVA virus. This study of animal models for SVA infection will be beneficial to develop vaccines and antivirals. View Full-Text
Keywords: Senecavirus A (SVA); emerging disease; PIVD; pathogenicity; China Senecavirus A (SVA); emerging disease; PIVD; pathogenicity; China
►▼ Show Figures 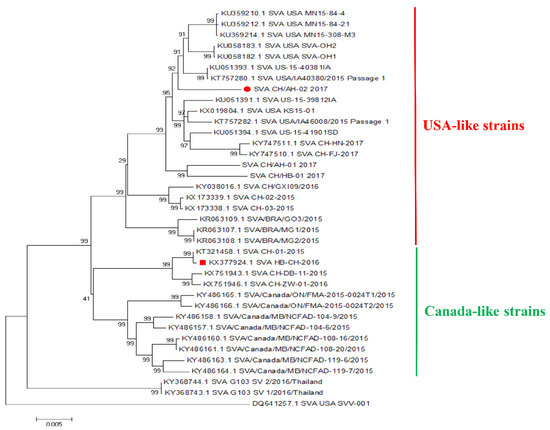