Streptococcus suis in Brazil: Genotypic, Virulence, and Resistance Profiling of Strains Isolated from Pigs between 2001 and 2016

Panama wilt, caused by Fusarium oxysporum f. sp. cubense (Foc) is considered one of the most devastating banana diseases in recorded history. The disease threatens the banana industry due to Tropical Race 4 (TR4) infecting the Cavendish cultivar. Forty-two of the 45 representative isolates from Luzon were pathogenic, based on leaf symptom index and vascular discoloration rating. Accurate, fast and reliable identification are pre-requisites for effective management considering there are yet no proven effective chemicals to control the disease, thus the confirmation by a PCR-based diagnostic tool is essential. Using race-specific primers, FocTr4-F/FocTr4-R and Foc-1/Foc-2, the absence of TR4 in Luzon has been confirmed, however, the occurrence of Race 4 has been reported, which should also be taken in consideration as the latter can also cause severe damage under favorable conditions. Furthermore, to examine genetic diversity of Foc in bananas, 55 of the 164 isolates collected from Regions I, II, III, IV and Cordillera Administrative Region (CAR) were analyzed by fingerprinting techniques using M13, ERIC and REP primers. Twenty-two reference isolates from Mindanao were also analyzed using the same primers. Foc isolates were differentiated into two clades at 25% similarity level, classifying all Mindanao isolates to clade A. Consistently high genetic variation was obtained from Luzon isolates using M13, an arbitrarily primed fingerprinting technique and repetitive elements, REP and ERIC-PCR, while low genetic variation was obtained from Mindanao isolates. ERIC-PCR was the most informative and predictive fingerprinting method as the TR4 isolates from Mindanao were grouped together. No grouping of Foc isolates was observed with respect to geographical origin, except isolates from Mindanao. In addition, grouping of Foc4 is also regardless of host variety in all analyses conducted. Overall, high genetic variability was recorded in Foc Philippine population for the three primers used, which might render host resistance vulnerable. View Full-Text
Keywords: Fusarium oxysporum pv. cubense; genetic diversity; Luzon; Panama Wilt; Tropical Race 4 Fusarium oxysporum pv. cubense; genetic diversity; Luzon; Panama Wilt; Tropical Race 4
►▼ Show Figures 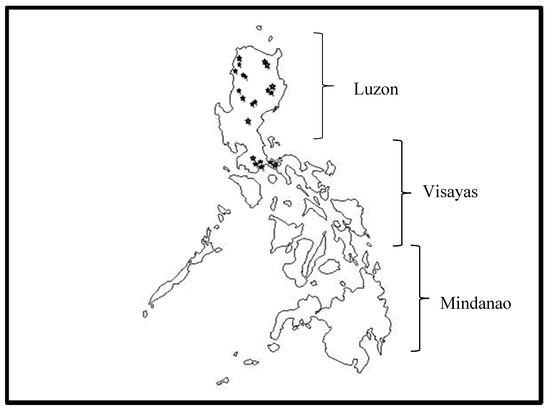