Antiviral Activity of Germacrone against Pseudorabies Virus in Vitro

Pseudorabies (PR), also known as Aujeszky’s disease, is an economically important disease for the pig industry. It has been eradicated in domestic pigs in many European countries, including France, but its causative agent—Suid Herpesvirus 1—is still circulating in wild boars. The risk of endemic PR in wild fauna lies in reintroducing the virus among domestic pigs and transmitting it to other mammals, especially hunting dogs for which the disease is rapidly fatal. As such infections are regularly reported in France, this study genetically characterized canine PR virus strains in the country to obtain information on their diversity and evolution. Partial sequencing of the glycoprotein C-encoding gene from 55 virus strains isolated from dogs between 2006 and 2018 showed that 14 strains belonged to genotype I-clade A and another 38 to genotype I-clade B, two clades usually reported in Western Europe. More surprisingly, three strains were found to belong to genotype II, suggesting an Asian origin. Genotype I-clade A strains exhibited the highest diversity as five geographically segregated genogroups were identified.
Keywords: pseudorabies; Aujeszky’s disease; phylogenetic analysis; gC encoding region; hunting dog; wild boar pseudorabies; Aujeszky’s disease; phylogenetic analysis; gC encoding region; hunting dog; wild boar

Pseudorabies (PR), also known as Aujeszky’s disease, is a highly contagious viral disease affecting multiple animal species. Swine—including domestic pigs and wild boars—are the only natural hosts of the virus. The disease it causes is characterized by central nervous system disorders that lead to death in younger pigs, and by respiratory signs and reproductive disorders in adults, which can remain latently infected following clinical recovery [1]. In other mammals, such as carnivores and cattle, the infection rapidly induces a fatal neurological disease with clinical signs similar to those of rabies [2]. PR is caused by Suid Herpesvirus 1, a member of the Herpesviridae family. The PR virus (PRV) is an enveloped double-stranded DNA virus with a genome of 143 kb in length encoding for 70 different proteins [3]. Its UL44 gene encodes glycoprotein C (gC), which plays a role in virus attachment to cell receptors and is one of the major targets for the host’s immune system [2]. The partial sequencing of the gC-encoding gene, which is one of the most variable regions of the genome and has the largest number of reported sequences [4,5], showed that whatever their host species, PRV strains can be classified as genotype I or genotype II, mostly depending on their geographical location, i.e., respectively, Europe/America or Asia [6,7,8]. Within genotype I, PRV strains can be divided into two clades: clade A, which contains PRV strains from Europe and America, and clade B with strains only originating from Western Europe [9,10,11]. Besides this variability dependent on geographical location, it appears that strains may evolve differently according to their host (i.e., domestic swine or wild boars) [12]. Italian strains of clade A could be classified into three groups, for example: “Italian clade 1” containing all the strains isolated from wild boars and hunting dogs, and “Italian clade 2” and “Italian clade 3”, containing strains isolated from domestic pigs or epidemiologically-related dogs, the most recent strains belonging to clade 2 [13].
Due to the significant economic losses caused by PR in the pig industry, an eradication policy including the slaughter of infected livestock and/or preventive vaccination of pigs was implemented in France from 1990 to 2006. Although PRV remained in the domestic pig population of Corsica, a Mediterranean island with semi-extensive herds, the eradication program was successful in mainland France and resulted in its PR-free status in 2008 (Decisions 2008/185/EC [14] and 2008/269/EC [15]). However, serological surveys indicated that PRV was still circulating in wild boars, with prevalence levels reaching 20–50% in regions with the highest population density [16,17], especially in the north-east and center of mainland France, as well as in Corsica [17,18,19]. The risk of such endemic PR in wild boars lies in reintroducing PRV into pig herds, especially those on outdoor farms due to potential contact between domestic pigs and wild boars [20]. Indeed, since the end of the eradication program in the pig industry, three PR outbreaks were detected through serological analyses in open-air pig farms in 2010, 2018, and 2019 [21,22,23]. Moreover, infected wild boars can also be a source of contamination for other mammals. Several cases of PRV-infected dogs have thus been reported in France in recent years [24,25,26,27]. Most often, these dogs presented clinical signs of PR after wild boar hunting and died within a few days. In this study, the PRV strains isolated from dogs in France from November 2006 to June 2018 were partially sequenced in order to obtain information on the nature, evolution, and geographical distribution of the PRV strains circulating among wild boars, which constitute a PRV reservoir.

Fifty-five PRV strains were propagated onto Porcine Kidney (PK-15) cells from 138 brains sampled from November 2006 to June 2018 (Table 1). Of these 55 strains, 32 were obtained from hunting dogs having been in contact with a wild boar, and two were from dogs that died after contact with a wild carnivore (respectively, a fox and a badger). No epidemiological information was available for the other 21 canine hosts. Partial UL44 gene sequences were obtained for each of these 55 PRV canine strains. Phylogenetic analyses showed that 52 (94.5%) of them belonged to PRV genotype I, including 14 strains (25.5% of total strains) isolated between 2009 and 2018 classified in clade A, and 38 strains (69% of total strains) obtained throughout the study period classified in clade B (Figure 1). Strains from genotype I-clade B appeared highly similar, indicating marked stability over the 12-year collection period, while those from clade A were more diverse, leading to five different genogroups within this clade (groups 1 to 5) (Figure 1). Apart from strains belonging to genotype I, the other three isolates (5.5% of strains) obtained in 2011, 2012, and 2017, respectively, belonged to PRV genotype II (Figure 1).

2.2. Geographical Distribution of PRV Strains Isolated from Dogs in France from 2006 to 2018

2.3. Comparison of French Canine PRV Strains with PRV Strains Isolated in Other Countries

Phylogenetic analyses performed with partial sequences of the UL44 gene from PRV strains identified in other countries showed that French canine strains from genotype I-clade A-Group 1 clustered with Italian swine strains from “Italian clade 2” [13] (Figure 3). I-A Group 2 strains were found to be related to the attenuated strain Bartha used for vaccines [28] and other isolates obtained from wild boars in Slovakia. Strains from Groups 3 and 4 were linked to strains isolated from hunting dogs in Italy and belonging to “Italian clade 1” [13]. Finally, Group 5 strains did not cluster with any foreign PRV strains. French canine strains from genotype I-clade B grouped with PRV strains isolated from wild boars or hunting dogs in Belgium, Germany, and Spain. Lastly, the French canine strains belonging to genotype II grouped with the other three genotype II strains isolated from Italian swine in 1987, 1991, and 1996 (Figure 3).

A comparison of partial gC protein sequences of French canine PRV strains showed that the I-A and I-B strains could be distinguished on the basis of amino acids in positions 38, 52, 55, 57, and 209 (Figure 4). Indeed, clade A strains were characterized by respectively G, P, A, A, and T at these positions, whereas clade B strains were characterized by a deletion at position 38 and S, E, V, and A at positions 52, 55, 57, and 209, respectively. Within clade A, strains from the five genogroups were differentiated by mutations or deletions of amino acids at positions 16, 25, 39, 43, 96, 156–157, and 176. Finally, genotype II strains had many mutations and insertions of amino acids between positions 50 and 69 compared to genotype I strains (Figure 4). At position 181–185, which corresponds to a hot spot region showing the largest variations of amino acids within this gC portion [28,29], the French canine PRV strains exhibited profiles VVVE (49/55 strains), VVVDD (4/55 strains) or VVEDE (2/55 strains) but not profile ALDDD that was reported to be characteristic of the domestic pig strains included in “Italian clade 3” [13].

Requests for laboratory diagnosis of PR in sick non-Suidae animals such as dogs and cats were made by veterinarians on a voluntary basis since notification of the disease was not mandatory in these animals. From November 2006 to June 2018, brain samples from 138 animals presenting neurological symptoms characterized by severe pruritus with self-mutilation were first tested for rabies then, if negative, were sent to the National Reference Laboratory for PR in France for PRV detection.
From 2006 to 2009, 38 samples were received and tested for PRV infection by propagation onto Porcine Kidney (PK-15) cells following the standard procedure [39]. The 100 samples received between 2010 and 2018 were first tested by real-time qualitative PCR targeting the gD-encoding gene (ADIAVET PRV REALTIME kit, Bio-X Diagnostics, Rochefort, Belgium), a fully validated method for PRV genome detection [40]. An attempt was then made to isolate the virus from the 67 PCR-positive samples, as described above.
Each isolated PRV strain was identified as follows: AUJ/species/FR (for France), followed by an identification number for the area, i.e., French administrative département where the strain was isolated, sample identification number, and year of isolation.

4.2. Sequencing of the gC-Encoding Gene

The UL44 gene partial sequences of the PRV canine strains isolated in France were aligned by ClustalW with MEGA7 software [41], and the alignment was optimized manually. The corresponding sequences (659 to 680 pb) of PRV strains isolated in France in previous studies or in other countries [9,10] were retrieved from GenBank and included in the phylogenetic analyses. Trees were generated with MEGA7 software using the maximum likelihood method and the Tamura 3-parameter substitution model (T92 G+I), which was chosen according to the Bayesian information criterion (BIC). Bootstrap values were derived from 1000 replicates.
The deduced protein sequences were obtained by translating the nucleotide sequences with MEGA7 software.

Conceptualization: M.-F.L.P.; investigation: C.D. and A.O.; formal analysis, visualization and writing—preparation of the original draft: C.D.; methodology: G.S.; supervision: G.S. and M.-F.L.P. All the authors contributed to reviewing and editing the manuscript.

The authors are grateful to all the veterinarians who sent biological samples from dogs for PRV detection. They would also like to thank Stéphane Quéguiner and Amélie Chastagner (Swine Virology Immunology Unit, ANSES Ploufragan-Plouzané-Niort Laboratory) for their helpful advice in sequencing and data analysis, as well as Aurélie Leroux, Claire De Boisséson and Véronique Béven (Viral Genetic and Biosecurity Unit, ANSES Ploufragan-Plouzané-Niort Laboratory) for their help in using the sequencer. 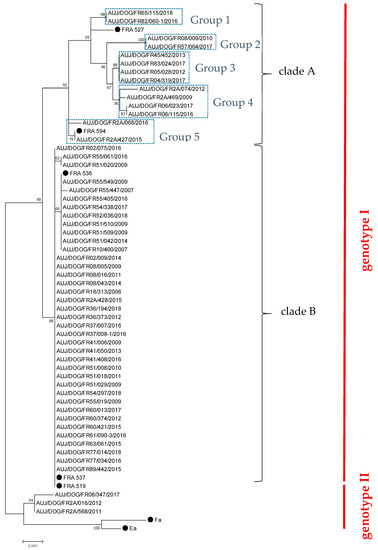 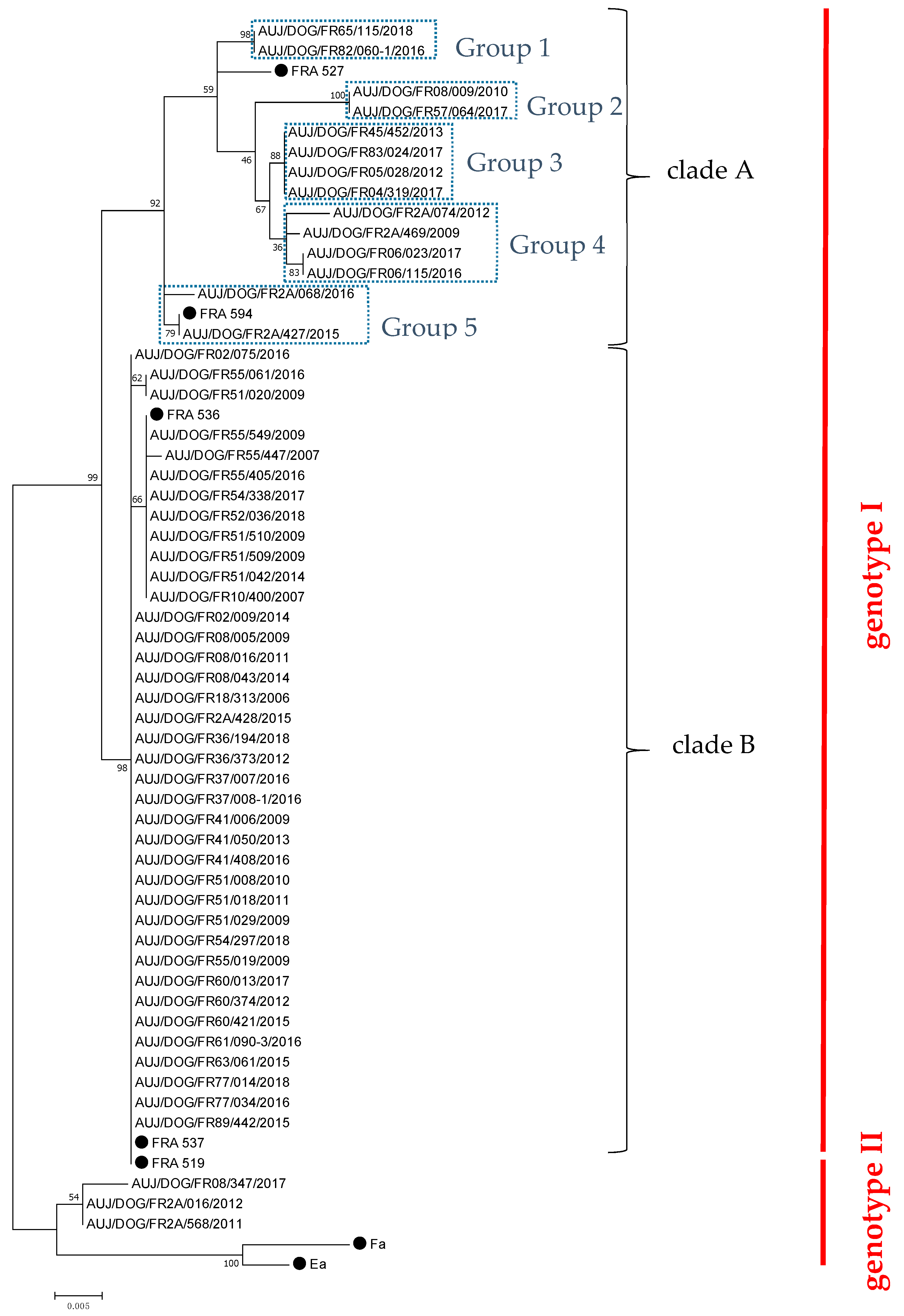