The hemagglutinin (HA) is a major influenza virus antigen, which, once recognized by antibodies and substitutions in HA genes, helps virus in escaping the human immune response. It is therefore critical to perform genetic and phylogenetic analysis of HA in circulating influenza viruses. We performed phylogenetic and genetic analysis of isolates from Ukraine, the vaccine strain and reference strains were used to phylogenetically identify trends in mutation locations and substitutions. Ukrainian isolates were collected between 2009–2017 and clustered in the influenza genetic groups 2, 6, 7, and 8. Genetic changes were observed in each of the antigenic sites: Sa – S162T, K163Q, K163I; Sb – S185T, A186T, S190G, S190R; Ca1 – S203T, R205K, E235V, E235D, S236P; Ca2 – P137H, H138R, A141T, D222G, D222N; Cb – A73S, S74R, S74N. In spite of detected mutations in antigenic sites, Ukrainian isolates retained similarity to the vaccine strain A/California/07/09 circulated during 2009–2017. However, WHO recommended a new vaccine strain A/Michigan/45/2015 for the Southern Hemisphere after the emergence of the new genetic groups 6B.1 and 6B.2. Our study demonstrated genetic variability of HA protein of A(H1N1)pdm09 viruses isolated in 2009–2017 in Ukraine. Influenza surveillance is very important for understanding epidemiological situations. View Full-Text
Keywords: genetic analysis; influenza A(H1N1)pdm09 virus; antigenic site; mutation genetic analysis; influenza A(H1N1)pdm09 virus; antigenic site; mutation
►▼ Show Figures 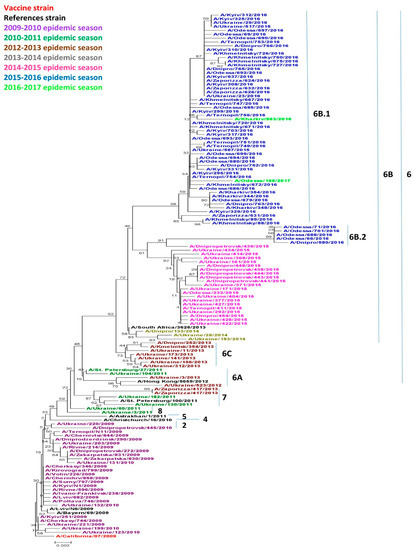