Emergence and Spread of Extended Spectrum β-Lactamase Producing Enterobacteriaceae (ESBL-PE) in Pigs and Exposed Workers: A Multicentre Comparative Study between Cameroon and South Africa
Next Article in Special Issue

Microbiological Air Quality in Heating, Ventilation and Air Conditioning Systems of Surgical and Intensive Care Areas: The Application of a Disinfection Procedure for Dehumidification Devices
Previous Article in Special Issue

Lassa virus (LASV), a highly prevalent mammalian arenavirus endemic in West Africa, can cause Lassa fever (LF), which is responsible for thousands of deaths annually. LASV is transmitted to humans from naturally infected rodents. At present, there is not an effective vaccine nor treatment. The genetic diversity of LASV is the greatest challenge for vaccine development. The reassortant ML29 carrying the L segment from the nonpathogenic Mopeia virus (MOPV) and the S segment from LASV is a vaccine candidate under current development. ML29 demonstrated complete protection in validated animal models against a Nigerian strain from clade II, which was responsible for the worst outbreak on record in 2018. This study demonstrated that ML29 was more attenuated than MOPV in STAT1-/- mice, a small animal model of human LF and its sequelae. ML29 infection of these mice resulted in more than a thousand-fold reduction in viremia and viral load in tissues and strong LASV-specific adaptive T cell responses compared to MOPV-infected mice. Persistent infection of Vero cells with ML29 resulted in generation of interfering particles (IPs), which strongly interfered with the replication of LASV, MOPV and LCMV, the prototype of the Arenaviridae. ML29 IPs induced potent cell-mediated immunity and were fully attenuated in STAT1-/- mice. Formulation of ML29 with IPs will improve the breadth of the host’s immune responses and further contribute to development of a pan-LASV vaccine with full coverage meeting the WHO requirements. View Full-Text
Keywords: Lassa virus vaccine; ML29 vaccine; STAT-1-/- mice; Lassa virus; Mopeia virus; interfering particles Lassa virus vaccine; ML29 vaccine; STAT-1-/- mice; Lassa virus; Mopeia virus; interfering particles
►▼ Show Figures 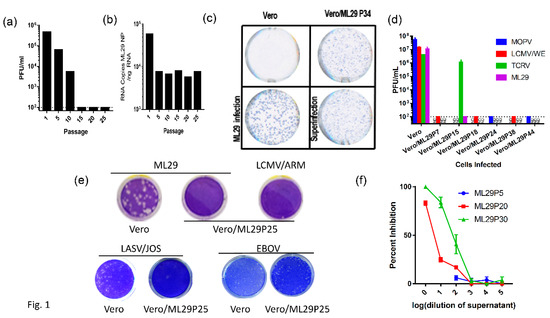