Bovine viral diarrhea (BVD) is one of the most important infectious diseases in cattle, causing major economic losses worldwide. Therefore, control programs have been implemented in several countries. In Germany, an obligatory nationwide eradication program has been in force since 2011. Its centerpiece is the detection of animals persistently infected (PI) with BVD virus, primarily based on the testing of ear tissue samples of all newborn calves for viral genome or antigen, and their removal from the cattle population. More than 48,000 PI animals have so far been detected and removed. Between the onset of the program and the end of 2016, the prevalence of these animals among all newborn calves decreased considerably, from 0.5% to less than 0.03%. The number of cattle holdings with PI animals likewise decreased from 3.44% in 2011 to only 0.16% in 2016. Since a large number of naïve, fully susceptible animals are now confronted with BVD virus, which is still present in the German cattle population, the challenge of the coming years will be the identification of remaining PI animals as quickly and efficiently as possible, and the efficient protection of BVD-free farms from reinfection. View Full-Text
Keywords: bovine viral diarrhea; epidemiology; prevalence; diagnostics; ear notch sampling; eradication program bovine viral diarrhea; epidemiology; prevalence; diagnostics; ear notch sampling; eradication program
►▼ Show Figures 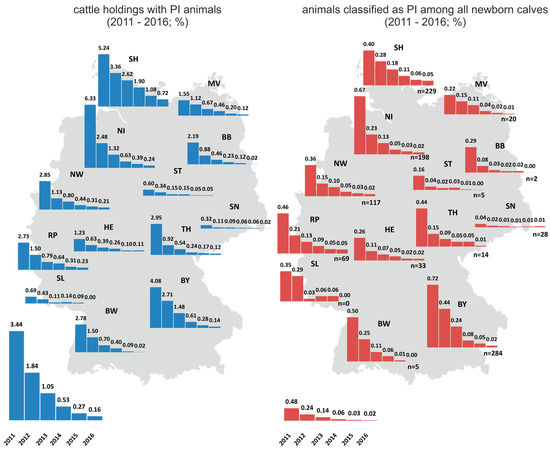