Occurrence and Control of Legionella in Recycled Water Systems

Bacteriophages are regarded as enteric viral indicators in faecally contaminated water systems and may indicate the presence of human viral pollution. They are relatively resistant to inactivation by natural and treatment processes. In this study, the presence of somatic coliphages and F-RNA coliphages was investigated in potable water from rural areas in the North West province. Water samples were aseptically collected from boreholes and tap water from some rural communities in the North West Province. Physical parameters of the water, such as the temperature, pH and turbidity, were measured before sample collection. Double-agar layer assay was performed using ISO, (1995, 2000) standard methods. Bottled water was used as a negative control and the strains фX174 and MS2 as positive controls. Of the 16 water samples collected, 15 were positive for somatic bacteriophages while F-RNA coliphages were detected in only two samples. Amongst the positive samples 189 and three plaque forming units were obtained for both somatic and F-RNA coliphages, respectively. No coliphage was detected in water from Masamane tap 1. The rest of the samples obtained from various rural areas were positive and did not comply with national and international standards for potable water. This was a cause for concern and should be further investigated. View Full-Text
Keywords: somatic phage; F-RNA phage; rural water supply; groundwater; potable water contamination somatic phage; F-RNA phage; rural water supply; groundwater; potable water contamination
►▼ Show Figures 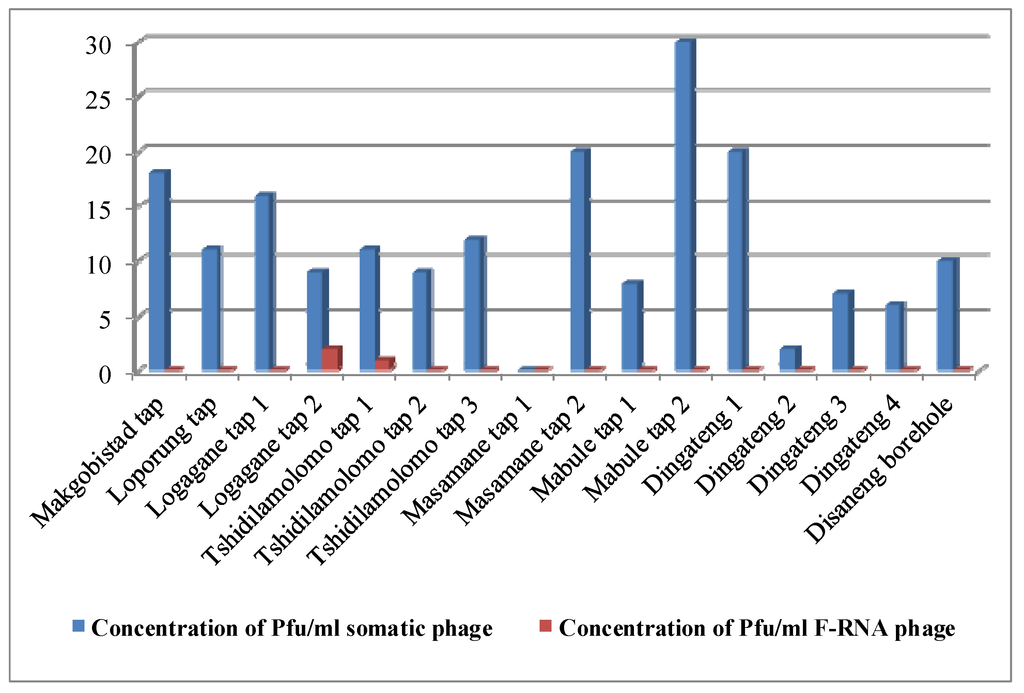