Tropical theileriosis is a tick-borne disease caused by hemoprotozoan parasites with considerable veterinary and economic impact worldwide. Ticks transmitting the disease belong to the Haemaphysalis, Rhipicephalus, and Hyalomma genera. The Hyalomma genus is very common in Sicily (Italy) and represents the main Theileria annulata vector in the island. Data concerning the molecular epidemiology of this pathogen are missing in the region. In 2018–2019, blood and serum samples were collected from 480 cows in seven Sicilian farms from four different provinces. Seroprevalence in the farms ranged from 22% to 71%. Three farms were selected for molecular analysis consisting of real-time PCR targeting the almost complete 18S ribosomal RNA (rRNA). Four amplicons per farm were sequenced and phylogenetic analyses were carried out. The four sequences were identical within each farm and showed 92–99% identity with the other farms and with sequences from Genbank. According to the phylogenetic analysis, these three sequences and an additional one from a laboratory-cultured Theileria annulata strain obtained in 1999 belonged to a single T. annulata clade with good bootstrap support with other sequences from Italy, India, and Iran, indicating limited geographical and temporal genetic variability of the parasite. This study represents the first phylogenetic analysis of T. annulata in Sicily, which will be useful to improve the strategies for theileriosis control and prevention. View Full-Text
Keywords: Piroplasmida; phylogenetic analysis; tick-borne pathogens; 18S rRNA; Sicily Piroplasmida; phylogenetic analysis; tick-borne pathogens; 18S rRNA; Sicily
►▼ Show Figures 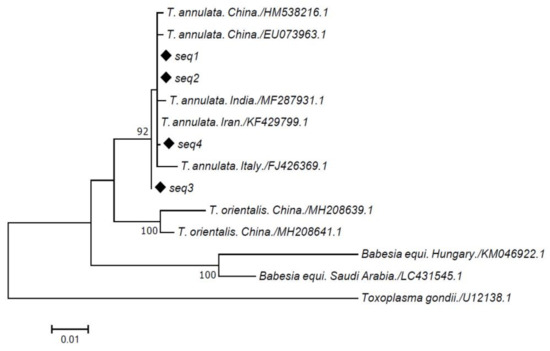