Effects of Different Parameters on Initiation and Propagation of Stress Corrosion Cracks in Pipeline Steels: A Review
Next Article in Special Issue

This work discusses on influence of niobium or molybdenum addition on microstructure and tensile properties of NiCr-based dental alloys. In this regard, the Ni-24Cr-8Nb, Ni-22Cr-10Nb and Ni-20Cr-12Nb (wt. %) alloys produced by arc melting process. To compare the typical Ni-22Cr-10Mo dental alloy was also produced. These ternary alloys were analyzed by chemical analyses, X-ray diffraction (XRD), scanning electron microscopy (SEM), electron dispersive spectrometry (EDS), thermogravimetric analysis (TG), Vickers hardness and tensile tests. Although the mass losses of the samples during arc melting, the optical emission spectrometry showed that the initial compositions were kept. The Ni-22Cr-10Mo alloy produced a matrix of Niss (ss—solid solution), whereas Ni3Nb disperse in a Niss matrix was also identified in Ni-Cr-Nb alloys. Excepting for the Ni-22Cr-10Nb alloy with mass gain of 0.23%, the as-cast Ni-Cr alloys presented mass gains close to 0.4% after heating up to 1000 °C under synthetic airflow. The hardness values, the modulus of elasticity, yield strength and ultimate tensile strength have enhanced, whereas the ductility was reduced with increasing niobium addition of up to 12 wt.-%.The Ni-22Cr-10Mo alloy presented an intergranular fracture mechanism containing deep dimples and quasi-cleavage planes, whereas the shallow dimples were identified on fracture surface of the as-cast Nb-richer Ni-Cr alloys due to the presence of higher Ni3Nb amounts. View Full-Text
Keywords: microstructure; tensile properties; intermetallics; casting; phase transformation microstructure; tensile properties; intermetallics; casting; phase transformation
►▼ Show Figures 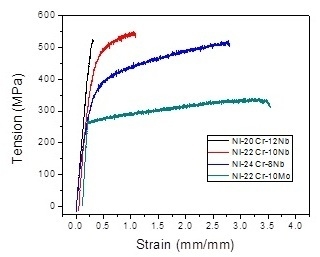