Comparative Analysis of Mitogenomes among Five Species of Filchnerella (Orthoptera: Acridoidea: Pamphagidae) and Their Phylogenetic and Taxonomic Implications
Previous Article in Journal

The whitefly pest complex Bemisia tabaci is one of the most devastating agricultural pests globally. Over the past two decades, B. tabaci populations reportedly increased in abundance throughout the cassava-growing regions of East and Central Africa. The current outbreak of large B. tabaci populations heightened its importance as a direct pest of cassava and also increased the prevalence of B. tabaci transmitted diseases, e.g., cassava mosaic disease and cassava brown streak disease. This undermined food security and livelihood benefits of cassava, a key staple crop in Africa with great resilience to climate change. Reasons for B. tabaci population increases are not well understood. Therefore, no practical options were developed for smallholder farmers in the region. To aid the design of effective and sustainable management strategies of the pest, we conducted field trials using five cassava genotypes in 2016 and 2017 to understand how the environment, cassava genotypes, and their interactions affect B. tabaci field populations. Our results revealed that mean monthly temperatures of 28–30 °C, total monthly rainfall of 30–150 mm, mean monthly RH of 55–70%, and development of cassava genotypes of low plant height and large leaf area and lobe width had a positive effect on B. tabaci population growth.

High populations of species in the whitefly complex Bemisia tabaci Gennadius (Hemiptera: Aleyrodidae) were reported to cause severe damage to cassava in East and Central Africa. However, reasons for B. tabaci population increases are not well understood. We investigated the effect of cassava morphological traits, temperature, rainfall and relative humidity (RH) on the abundance of B. tabaci. Five cassava genotypes with varying levels of resistance to cassava mosaic disease, cassava brown streak disease, and B. tabaci infestation were planted in three Ugandan agro-ecological zones. The experiment was conducted in 2016 and 2017 in a randomized complete block design. Across all locations, the tallest genotype Alado alado supported the lowest number of B. tabaci adults. In areas with high B. tabaci prevalence, leaf area, leaf lobe width, and leaf lobe number exhibited significant positive effects (p < 0.001) on B. tabaci adult count. Positive effects of relative humidity and negative effects of temperature and rainfall on B. tabaci adult and nymph counts were observed in 2016 and 2017, resulting in low populations in Lira. Evidently, temperatures of 28–30 °C, rainfall of 30–150 mm and RH of 55–70%, and deployment of cassava genotypes of low plant height, large leaf area, and lobe width significantly enhanced B. tabaci population growth. View Full-Text
Keywords: whitefly; cassava genotype; plant morphological characteristics; population dynamics; climatic conditions whitefly; cassava genotype; plant morphological characteristics; population dynamics; climatic conditions
►▼ Show Figures 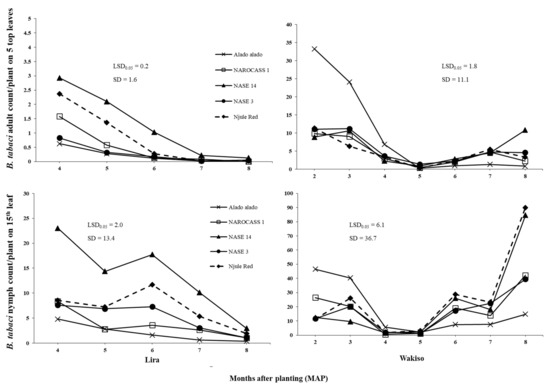