New Insight into the Systematics of European Lepidocyrtus (Collembola: Entomobryidae) Using Molecular and Morphological Data
Next Article in Special Issue

Quantitative estimates of vector populations and their infectivity in the wild and in cultivated compartments of agroecosystems have been carried out to elucidate the role of the wild compartment in the epidemiology of Flavescence dorée (FD). Seven sites were selected for the investigations in the Piedmont Region of Italy. They were characterized by a high variety of agricultural and ecological landscape features, and included a vineyard surrounded by wild vegetation. In order to describe abundance and prevalence of FD-infected vectors in the cultivated and wild compartments of the vineyard agroecosystem, adults of Scaphoideus titanus were collected by yellow sticky traps inside and outside the vineyard over the period July 10th–September 9th, 2015. They were counted and singly analyzed for the presence of FD phytoplasmas by PCR. Multifactorial correlations among vector population level, prevalence of infected insects inside and outside the vineyards, disease prevalence in cultivated and wild Vitis plants, and location of wild Vitis plants with respect to the vineyard were analyzed. Abundance of S. titanus adults significantly decreased from the end of July onwards, particularly inside the vineyard (average range 22.7 ± 2.5 insects/trap). Percentage of FD-positive S. titanus was significantly higher outside the vineyard (up to 48% on average) compared to inside the vineyard (up to 34% on average), and increased during the season in both compartments. View Full-Text
Keywords: leafhopper vector; wild Vitis; Flavescence dorée epidemiology leafhopper vector; wild Vitis; Flavescence dorée epidemiology
►▼ Show Figures 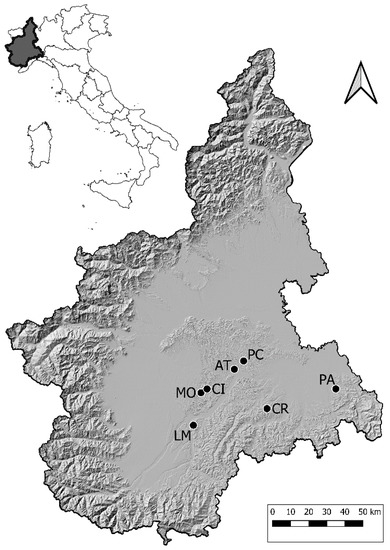