The early detection and identification of the red imported fire ant Solenopsis invicta are crucial to intercepting and preventing it from becoming established in new areas. Unfortunately, the visual identification of fire ants to species is difficult and ant samples must often be couriered to an expert for positive identification, which can delay control interventions. A lateral flow immunoassay that provides a rapid and portable method for the identification of S. invicta ants was developed and commercialized, and it is available from Agdia, Inc. under the trade name InvictDetectTM. While the test was 100% accurate when using the recommended minimum sample of three ant workers, InvictDetectTM was field tested for the first time while using homogenates prepared from single S. invicta workers to determine the effectiveness of the method under these non-recommended conditions. Disregarding social form, the false negative rate was 25.5% for an initial single worker ant test and 10% after a repeat test was performed. The InvictDetectTM false negative response was independent of worker weight. Though InvictDetectTM requires a minimum of three worker ants, the test improves upon current identification methods because it can be conducted in the field, be completed in 10–30 min, and requires no special training or expertise. View Full-Text
Keywords: biosecurity; immunological detection; invasive insect; lateral flow immunoassay biosecurity; immunological detection; invasive insect; lateral flow immunoassay
►▼ Show Figures 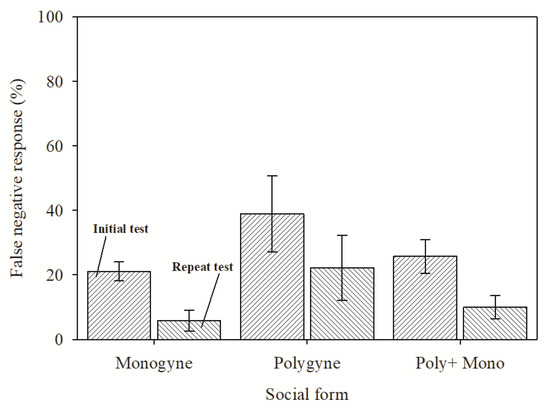