The lone star tick (Amblyomma americanum L.) is native to the United States, with its primary range encompassing the Southeast and portions of the Midwest. It is an aggressive ectoparasite that actively seeks out hosts through detection of carbon dioxide and vibrations and can transfer ehrlichiosis-causing bacteria as well as a carbohydrate that causes alpha-gal syndrome (red meat allergy) in humans. It has become of increasing concern as its range has recently expanded into coastal regions of the Northeast. Historically, harsh northeastern winter weather conditions made these areas inhospitable for A. americanum survival, but a warming climate coupled with increased host availability seem to have facilitated their range expansion. We developed a study to observe the effects of weather conditions on adult A. americanum overwintering survival. The study was conducted over three years in Connecticut and Maine. Ground-level conditions were manipulated to determine the effects of differing combinations of natural insulative barriers (leaf litter and snow accumulation) on adult A. americanum survival. We determined that there was a significant difference in survival between the two states, between years in Maine, and between sexes within Connecticut. However, presence or absence of snow and/or leaf litter had no impact on survival. Overall, we found a positive correlation between mean hourly temperature and adult survival in Maine, where temperatures were consistently below freezing. The results of this study can be included in an adaptive, predictive analytic model to accommodate the expected fluctuations and range expansion of A. americanum that will most likely accompany an increase in temperatures throughout the Northeast. View Full-Text
Keywords: Amblyomma americanum; climate change; overwintering survival Amblyomma americanum; climate change; overwintering survival
►▼ Show Figures 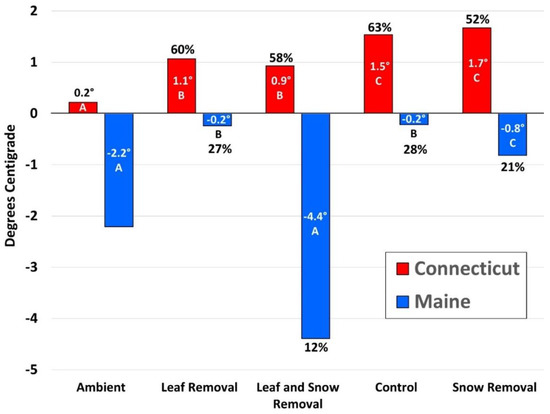