Odonata: Who They Are and What They Have Done for Us Lately: Classification and Ecosystem Services of Dragonflies

False codling moth (FCM), Thaumatotibia leucotreta is a key pest of citrus orange and other plants causing fruit loss through larval feeding. Although this pest is native to sub-Saharan Africa little is known on its performance on orange and vegetables in Kenya and Tanzania. Our objective was to assess the incidence, oviposition preference and offspring performance of FCM on orange and vegetables, namely, okra, African eggplant, chili and sweet peppers. A higher percentage of orange with FCM damage symptoms was recorded from the ground than from the tree sampled fruit. However, FCM larval incidence was higher for the latter (tree sampled fruit). The highest FCM larval incidence amongst the vegetables was recorded on African eggplant (12%) while the lowest was on okra (3%). Orange was the most while African eggplant was the least preferred for oviposition by FCM. Among the vegetables tested, strong oviposition preference was found for sweet pepper; however, larval survival was lowest (62%) on this crop. Highest larval survival (77%) was recorded on orange. Most demographic parameters (i.e., intrinsic rate of increase, doubling time) were comparable among the studied host plants. The results are discussed in line of FCM management. View Full-Text
Keywords: incidence; ripe; mature; fruit; oviposition; preference; offspring; survival incidence; ripe; mature; fruit; oviposition; preference; offspring; survival
►▼ Show Figures 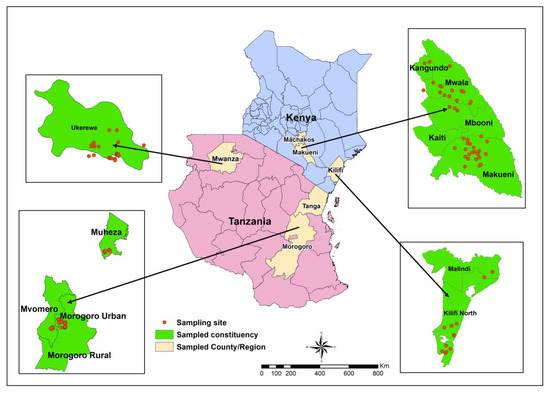