Article
A Discussion on Present Theories of Rubber Friction, with Particular Reference to Different Possible Choices of Arbitrary Roughness Cutoff Parameters
by

:
Since the early study by Grosch in 1963 it has been known that rubber friction shows generally two maxima with respect to speed—the first one attributed to adhesion, and another at higher velocities attributed to viscoelastic losses. The theory of Klüppel and Heinrich and that of Persson suggests that viscoelastic losses crucially depend on the “multiscale” aspect of roughness and in particular on truncation at fine scales. In this study, we comment a little on both theories, giving some examples using Persson’s theory on the uncertainties involved in the truncation of the roughness spectrum. It is shown how different choices of Persson’s model parameters, for example the high-frequency cutoff, equally fit experimental data on viscoelastic friction, hence it is unclear how to rigorously separate the adhesive and the viscoelastic contributions from experiments.
Keywords:
rubber friction; viscoelasticity; roughness

To analyze typical compounds of interest in asphalt vs. tire contact and to give a quantitative example of the analysis made, all of the following is referred to the experimental data obtained by Tolpekina and Persson [14] (TP in the following) for three different reference compounds A, B, and C (see [14]), on which quite general information are provided: “B is a summer tread compound filled with carbon black. A is a summer tread compound filled with silica and containing a traction resin. C is a winter tread compound, filled with silica and containing the same traction resin (in the same relative volume fraction) as for Compound A”. In the following subsection the power spectral density (PSD) of a rough surface, the viscoelastic properties of the rubber, and experimental friction data used as references for theoretical results are shown.

For rough surface for the rubber friction analysis, a concrete block was considered. This type of substrate is very stable (negligible wear) and is easily available in a large number of nominally identical blocks. The most important information about the substrate is the surface roughness power spectrum. Notice that it is possible to find different normalization of the PSD and therefore it is important to pay attention to the formulations used for the calculation of the quantities such as the root-mean-square (RMS) height hrms, the RMS slope h′rms, and the RMS curvature h″rms [16]. Referring to the Persson formulation, Figure 1 shows the 2D surface roughness power spectrum of the concrete surface. The significant range of interest of this self-affine fractal power spectrum can be assumed to be a power law: where the Hurst exponent H = 0.86 and C0 = 0.001152 m^(2−2H). The wavenumber q0 considered in this study is q0 = 102.7 [1/m] but fortunately the choice of this truncation is not very relevant for friction estimation, while the choice of the large wavenumber cutoff is extremely more sensible and arbitrary, as debated in the next section.

A full viscoelastic rubber characterization is fundamental for the friction calculations. The knowledge of the complex elastic modulus of the rubber over a rather large frequency range is necessary, and more recently it has been suggested also its behavior at different strain values when the non-linear effects related to the viscoelastic modulus of the rubber should be taken into account. The standard way of measuring the viscoelastic modulus is to deform the rubber sample in an oscillatory manner with a constant strain or stress amplitude. This is done at different frequencies and then repeated at different temperatures. The results measured at different temperatures can be shifted according to the time–temperature superposition principle to form a master curve covering a wide range of frequencies at the chosen reference temperature. TP have performed measurements of the viscoelastic modulus in both shear and in tensile (elongation) modes, providing both the shear modulus G(ω) and the Young’s modulus E(ω). These moduli are related, for the lack of better approximations, via E = 2G (1 + ν) where ν = 0.5 is the Poisson ratio.
In their paper, TP [14] tested three different compounds: A is a summer tread containing silica and resin, B is a summer tread filled with carbon black and C is a winter tread filled with silica and traction resin. The viscoelastic moduli of the three different rubber compounds A, B, C, are detailed in Figure 2, as storage (Re E) and loss (Im E) moduli.
Let us consider for the compound under investigation a power law approximation for the moduli, at low frequency. This approximation, which appears quite good in the practical range of interest for rubber compounds used in tires (as depicted in Figure 2), also permits a simple estimate of the relevant equations in closed form at low speeds. The power law behavior considered is:
In Table 1 the parameters of the power law approximation for the three compounds are summarized.
Notice that TP affirms that when a rubber tread block is sliding on a road surface, the strain in asperity contact regions is typically of order one, ε ≅ 1. To take into account the effect of these large strain, they perform strain sweep measurements up to a strain of order one, resulting in a reduction of the small strain modulus E(ω) of a factor Sf ≅ 0.1, where Sf is the strain softening factor [15].

The available measured data for low velocities (LV) and higher velocity (HV) was obtained by TP [14] using two different experimental setups. Friction for LV was obtained by means the Leonardo da Vinci experiment, which allows only measurement of the friction coefficient on the branch of the μ(v)-curve where the friction coefficient increases with increasing sliding speed. The friction coefficients for the sliding speeds of 0.1, 0.3, 1, and 1.8 m/s were obtained by means of a linear friction tester (LFT).
Figure 3 shows the measured data and calculated results, by using Persson formulation, for rubber sliding on concrete. Notice that the total friction curve is calculated as a sum of the viscoelastic and adhesive contribution plus a constant term μconst = 0.2 (an empirical choice, for the lack of better data), which the authors refer to the “scratching of the concrete surface by the hard filler particles”.
The parameters adopted for the friction calculation are summarized in Table 2.

3. Discussion on the Viscoelastic and Adhesive Contributions

In this section, we want to point out that the recognition of the importance of the adhesive and viscoelastic contribution is not at all simple and obvious. Indeed, starting from the viscoelastic properties of the rubber and the PSD of a rough surface, we propose different set of arbitrarily determined parameters, which return a different combination of Gaussian-like curves of the two contributions, allowing an equally good fit of the experimental data.
For all the three compounds, the theoretical results obtained calculating the viscoelastic contribution using the simplified formulation were first investigated where h′rms is the rms slope of the surface that depends on the cutoff wavenumber q1 and E(q1 v) is the complex viscoelastic modulus of the rubber (for a given temperature), at the circular frequency 2πf = q1v. Adopting the power law approximation of the moduli at low frequencies, the coefficient K is calculated as:
Again, the total friction curve is calculated as a sum of the viscoelastic and adhesive contributions plus the constant term μconst = 0.2. The parameters are the same as those used for the calculation with the Persson theory and reported in Table 2.
For each compound, Figure 4 shows the measured and calculated friction coefficient on the concrete surface as a function of the logarithm of sliding speed, using the simplified formulation. The lower red curve represents the (calculated) viscoelastic contribution to the friction coefficient, while the green is the adhesive contribution and the upper blue curve is the total calculated friction.
The results obtained with Persson theory and with our simplified assumption for the loss and storage modulus do not show significant difference for low-velocity friction data being these results considered to be principally influenced by the adhesion. For high sliding velocity some difference can be appreciated but these data are often not predicted appropriately.
Here it should be emphasized that these results are strongly influenced by the value of some parameters that are fixed in a non-rigorous way. In particular:

-
the choice of the cutoff wavenumber q1 influences strongly both viscoelastic and adhesive contributions;
-
the term μconst = 0.2 which is attributed to scratching of the concrete surface by the hard filler particles is quite arbitrary;
-
The reference velocity v* and the τf0 significantly influence the adhesive curve;
-
The assumption that for sliding friction on the rough surfaces the deformation is ε ≅ 1 implies a reduction of the strain modulus E(ω) of a strain factor Sf ≅ 0.1. Due to the non-linear effects related to the viscoelastic modulus of the rubber, lower strain values would cause sensible variation of the Sf and therefore of the adhesive friction.

Adopting the simplified formulation (7) for the viscoelastic friction and Equations (3) and (4) for the adhesion, different combinations in the choice of these parameters are proposed, which are able to give an equally good fitting of the available experimental data. In Table 3, Table 4 and Table 5, five different parameters set used for simulation for Compound A, B, and C, respectively, are reported. Figure 5 reports the corresponding friction results. All the proposed fits predict quite accurately the low-velocity experimental data, while at high velocity the fit is generally poor. Notice that we have varied the high-wavenumber cutoff q1 of several orders of magnitude obtaining almost equally good fits for the friction coefficient. This poses fundamental questions on the physical meaning of this quantity and on the role that it plays in modern theories of viscoelastic friction.

In conclusion, the theories of rubber friction seem to have evolved over the years, but now the emphasis on the viscoelastic losses for tire–road contact due to fractal roughness has been much reduced, because the adhesive term is considered dominant. Persson’s theories [4,13,14,15] seem to have evolved more rigorously in the contact mechanics treatment (they are approximate, but the approximations have been corrected over the years), but the adhesion part is less fundamentally rigorously introduced, having been less studied and compared with experiments, and perhaps more effort in the coming years should concentrate on this. Klüppel’s theories [3,10,11,12], which seem instead to remain attached to the GW asperity description of roughness, which today is considered inaccurate. While this may not be very important for viscoelastic losses, since anyway there is an arbitrary truncation to be defined, it is less clear how this has an impact in the real contact area estimation, and hence the adhesive friction. While Klüppel’s theories have attempted to discuss at length the problem of truncation of roughness—and the resulting conclusion is not so clear—Persson’s theory has recently made a very abrupt choice of truncation at rms slope of 1.3, which is not well explained. We have indeed offered some examples on how different choices of the parameters (for example varying by orders of magnitude the high-frequency cutoff) equally fit the data, and hence it is unclear in Persson’s theory, for example, how to rigorously separate the two contributions from experiments. 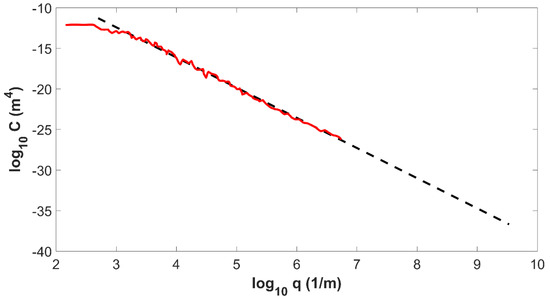 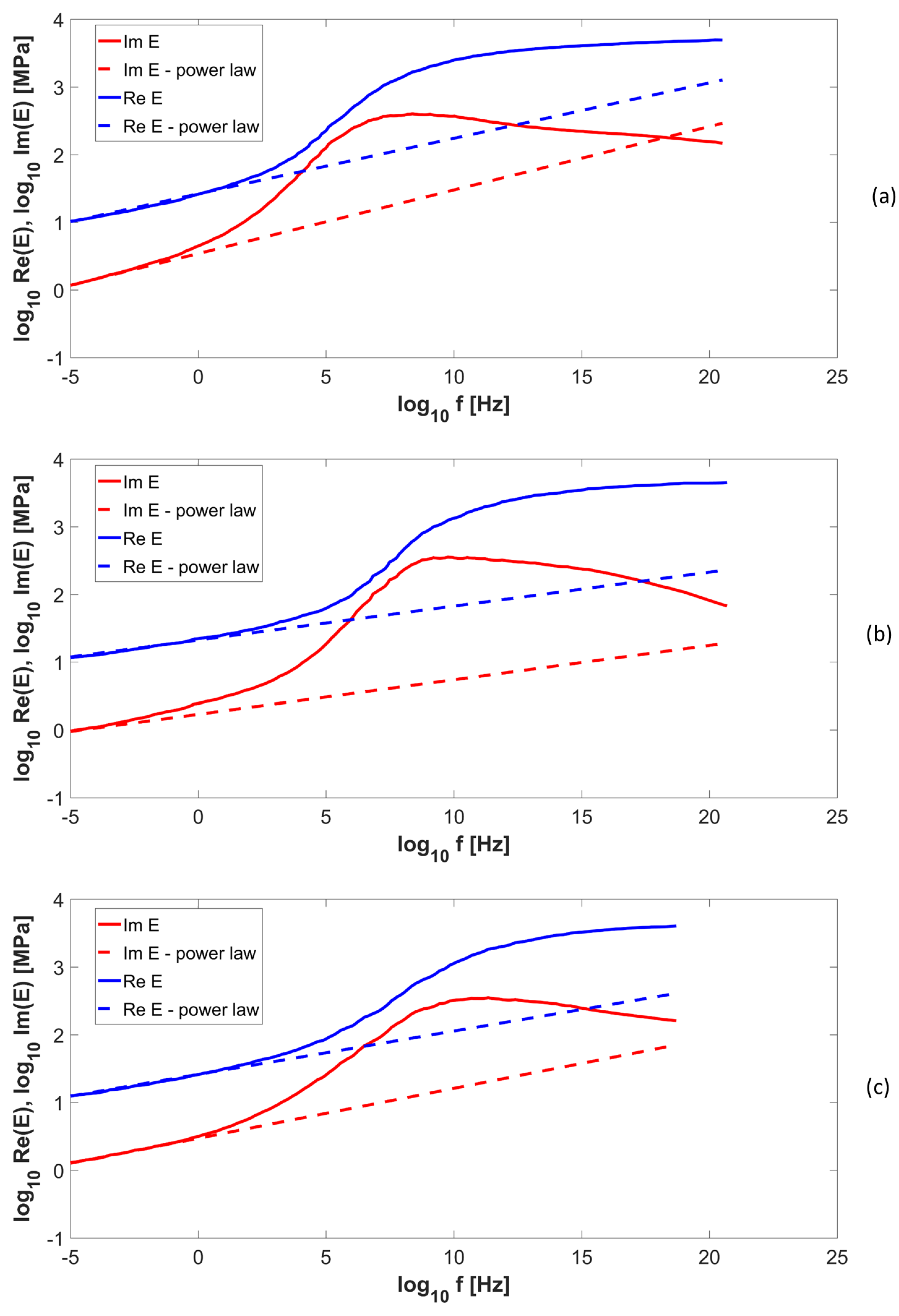 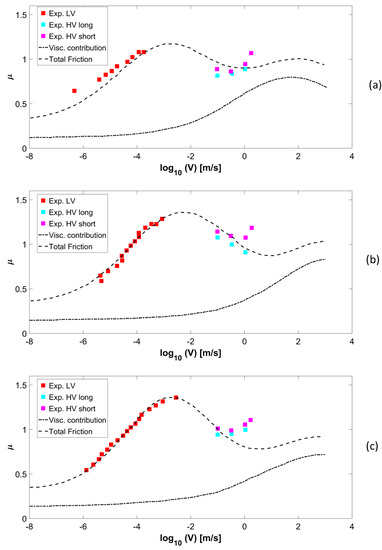 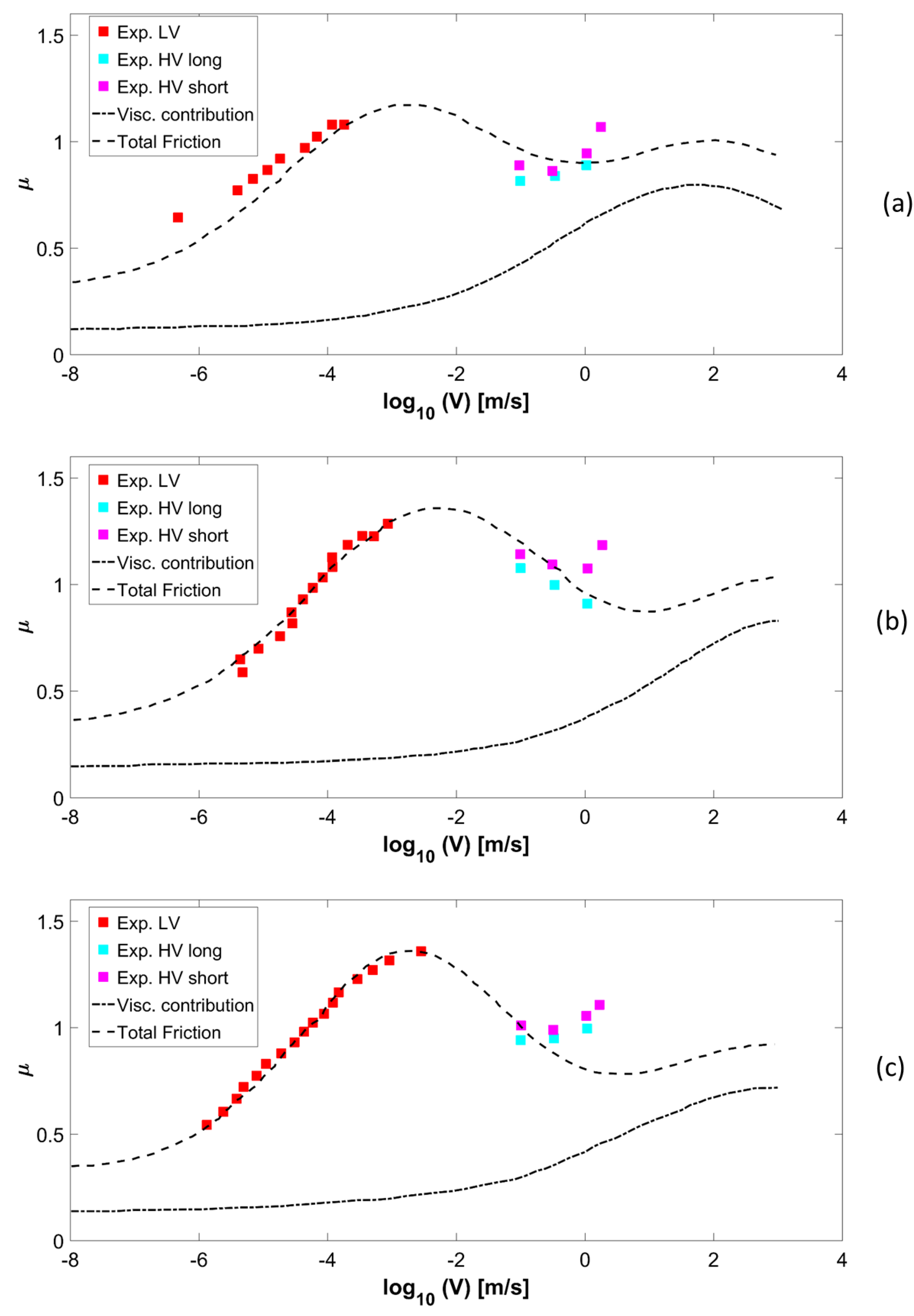 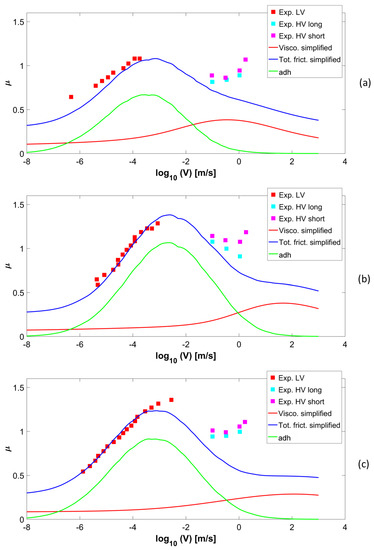 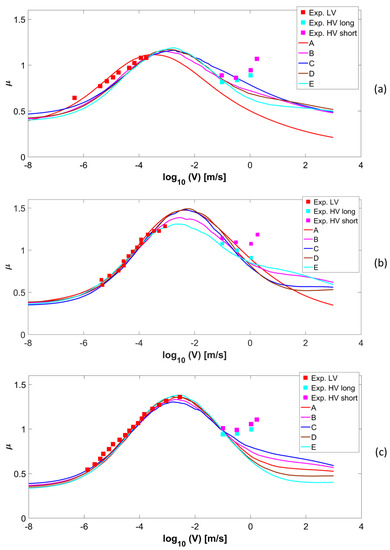 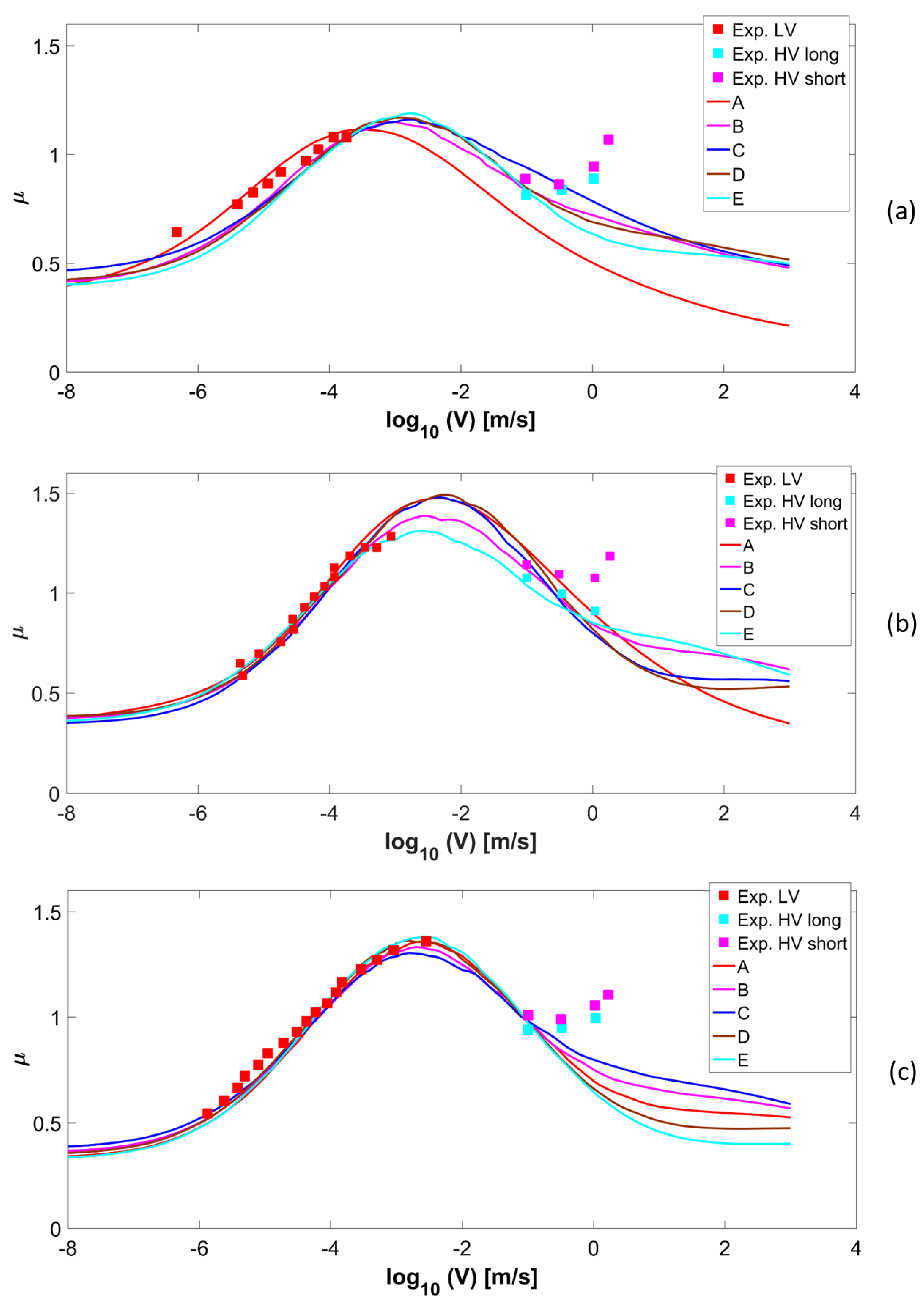