miR-22 is one of the most abundant miRNAs in the liver and alterations of its hepatic expression have been associated with the development of hepatic steatosis and insulin resistance, as well as cancer. However, the pathophysiological roles of miR-22-3p in the deregulated hepatic metabolism with obesity and cancer remains poorly characterized. Herein, we observed that alterations of hepatic miR-22-3p expression with non-alcoholic fatty liver disease (NAFLD) in the context of obesity are not consistent in various human cohorts and animal models in contrast to the well-characterized miR-22-3p downregulation observed in hepatic cancers. To unravel the role of miR-22 in obesity-associated NAFLD, we generated constitutive Mir22 knockout (miR-22KO) mice, which were subsequently rendered obese by feeding with fat-enriched diet. Functional NAFLD- and obesity-associated metabolic parameters were then analyzed. Insights about the role of miR-22 in NAFLD associated with obesity were further obtained through an unbiased proteomic analysis of miR-22KO livers from obese mice. Metabolic processes governed by miR-22 were finally investigated in hepatic transformed cancer cells. Deletion of Mir22 was asymptomatic when mice were bred under standard conditions, except for an onset of glucose intolerance. However, when challenged with a high fat-containing diet, Mir22 deficiency dramatically exacerbated fat mass gain, hepatomegaly, and liver steatosis in mice. Analyses of explanted white adipose tissue revealed increased lipid synthesis, whereas mass spectrometry analysis of the liver proteome indicated that Mir22 deletion promotes hepatic upregulation of key enzymes in glycolysis and lipid uptake. Surprisingly, expression of miR-22-3p in Huh7 hepatic cancer cells triggers, in contrast to our in vivo observations, a clear induction of a Warburg effect with an increased glycolysis and an inhibited mitochondrial respiration. Together, our study indicates that miR-22-3p is a master regulator of the lipid and glucose metabolism with differential effects in specific organs and in transformed hepatic cancer cells, as compared to non-tumoral tissue. View Full-Text
Keywords: fatty liver disease; microRNAs; lipid metabolism; glycolysis; obesity fatty liver disease; microRNAs; lipid metabolism; glycolysis; obesity
►▼ Show Figures 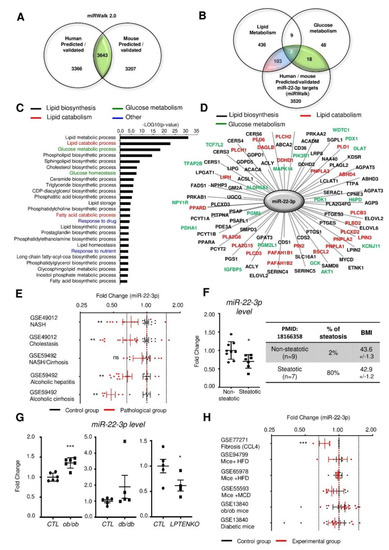