Clonogenic assays are the gold standard method for assessing radiosensitivity in vitro [1]. Cancer research studies have reported the radiosensitivity of various cell lines obtained using clonogenic assays [2]. In addition, clonogenic assays are used to determine the relative biological effectiveness (RBE) of carbon ions over photons in clinical carbon ion radiotherapy (CIRT) [3,4,5].
Recent advances in computer science have enabled the integration of published experimental data into big data platforms. For example, in the field of genomics, published sequencing data are compiled in databases such as the Catalogue of Somatic Mutations in Cancer [6] and Cancer Cell Line Encyclopedia (CCLE) [7]. From this perspective, integration of published radiosensitivity data obtained by clonogenic assays will be a powerful strategy to promote radiation oncology research [8,9,10]. However, the data integration is difficult because there are two types of clonogenic assays using different cell plating methods; namely, cells are plated before or after irradiation (referred to hereafter as pre-IR plating and post-IR plating, respectively). In pre-IR plating methods, single cells in suspensions are seeded on plates and subjected to a treatment of interest (e.g., drug exposure or irradiation) after additional incubation for a few hours to days that allows cells to attach on the plates. Pre-IR methods are capable of creating multiple technical replicates for a treatment of interest easily; therefore, pre-IR plating methods are predominantly used for cancer research [9]. On the other hand, in post-IR plating methods, plates with subconfluent cells are subjected to a treatment of interest, which is followed by trypsinization, single cell suspension, and seeding for replication. Post-IR plating methods have been utilized in the historical work on the beam design of CIRT [3,4,5]. This is probably due to the fact that carbon ions are an extremely limited medical resource as there are only 13 institutions available for CIRT across the world as reported on the website of Particle Therapy Co-Operative Group (https://www.ptcog.ch/index.php/facilities-in-operation). We assume that researchers have intended to save precious machine time by avoiding irradiation of all replicates.
In principle, pre-IR and post-IR methods are different in terms of cell condition at the time of irradiation. In post-IR methods, cells are capable of cell-to-cell signal transduction in immediate response to irradiation before being separated from each other, which may affect radiosensitivity. However, the effect of the plating method on the experimental outcomes of clonogenic assays remains unelucidated, which limits progress in radiation oncology research. For example, Amornwichet et al. reported that the RBE of carbon ions in nine epidermal growth factor receptor (EGFR)-wild-type non-small cell lung carcinoma (NSCLC) cell lines was 2.6 ± 0.3 at the center of the 6-cm-wide spread-out Bragg peak (SOBP) [11], whereas Kagawa et al. reported that the RBE in human salivary gland (HSG) cells, the cell line used as the reference in the clinical CIRT beam set-up, was 1.8 at the center of the same 6-cm SOBP [5]. Although these data indicate that CIRT is more effective for EGFR wild-type NSCLCs, a definitive conclusion cannot be made because the former and latter studies used pre-IR and post-IR plating methods, respectively.
The aim of this study was to elucidate the effect of the clonogenic assay plating method on the experimental outcome of cancer cell radiosensitivity.

A549 (human lung adenocarcinoma cell line) and HSG (human salivary gland tumor cell line) were used in this study. A549 was chosen because this cell line is commonly used for clonogenic assays in general cancer research, which predominantly uses pre-IR plating methods [2,9]. HSG was chosen because this cell line has been used as the reference cell line for CIRT beam set-up, which uses post-IR plating methods [3,4,5]. Previous studies indicate that both cell lines show intermediate-to-relatively-low sensitivity to photons [11,12,13]. A549 cells were purchased from ATCC (CCL-185, Manassas, VA, USA). HSG cells were purchased from JCRB Cell Bank (HSGc-C5, JRCB1070, Ibaragi, Japan). Cells were cultured in RPMI-1640 (Sigma-Aldrich, St. Louis, MO, USA) supplemented with 10% fetal bovine serum (Life Technologies, Carlsbad, CA, USA) in a 5% CO2 incubator at 37 °C. No other additives were used in the media. Cells in the log-phase of growth were used for experiments.

To the best of our knowledge, this is the first study to investigate the effect of different plating methods of clonogenic assays on the experimental outcomes. The results provide important insight supporting inter-study comparisons and integrated analysis of published clonogenic assay data regardless of the plating method used, which will contribute the promotion of radiation oncology research in the era of big data science.
The concept of precision medicine, that is optimization of treatment strategy based on genetic information of individual cancers, has become widespread in the field of cancer chemotherapy according to the advancement of next-generation sequencers. For example, if a lung cancer was found to harbor ret proto-oncogene (RET) fusions, then the cancer can be efficiently treated with Vandetanib, an inhibitor of RET tyrosine kinase [14]. In the field of radiation oncology on the other hand, the concept of precision medicine has not been applied to the clinic sufficiently. Theoretically, if we could predict the sensitivity of a tumor to radiotherapy at the time of diagnosis, then we can stratify radioresistant cases to the radiotherapy modalities capable of high-dose delivery (e.g., stereotactic body radiotherapy and particle therapies) that are rarer than conventional three-dimensional conformal radiotherapy. To this end, establishment of genetic profiles that predict cancer radioresistance is an urgent need. One of the barriers for the research aiming to meet this need is the absence of the big data pertaining to cancer cell radiosensitivity that can be used for analysis in combination with genomics data. This is in contrast to the situation for chemotherapy, where multiple databases for the sensitivity of cancer cells to anticancer drugs (e.g., CCLE) are open to public [7]. Although we find an enormous number of publications that report on the cancer cell radiosensitivity as assessed by clonogenic assays, the variance in the plating method has prevented us from conducting inter-study comparison and integration of these radiosensitivity data. Our data provide insight in overcoming this issue; using multiple cancer cell lines commonly used in this field, we showed that the difference in the plating method on the clonogenic assay-derived radiosensitivity data is negligibly small in A549 and HSG cells, suggesting that the published clonogenic data can be analyzed in combination regardless of the plating method. In addition, as explained in the Introduction, our data rationalize the inter-translation between genomics-associated radiosensitivity data and carbon-ion RBE data obtained predominantly using pre-IR and post-IR plating methods, respectively. Additionally, we assume that the findings from this study may be applicable to carbon ion experiments, warranting further research.
This study had several limitations. Minor subtypes of plating methods, such as IR in cell suspensions or delayed post-IR plating [9], were not investigated. In addition, cell lines other than A549 and HSG were not included. Research is warranted to further elucidate the influence of the difference in the methods in clonogenic assays on cancer cell radiosensitivity.

We showed that SF2, SF4, SF6, SF8, D10, and D50 values obtained using clonogenic assays were highly consistent between pre-IR and post-IR methods in A549 and HSG cells. These data support the strategic robustness of inter-study comparisons and integrated analysis of published clonogenic assay data, regardless of the plating method used. Thus, these data will contribute to promote radiation oncology research in the era of big data science.

This research was funded by Grants-in-Aid from the Japan Society for the Promotion of Science for KAKENHI [19K17162]. This work was also supported by Gunma University Heavy Ion Medical Center. 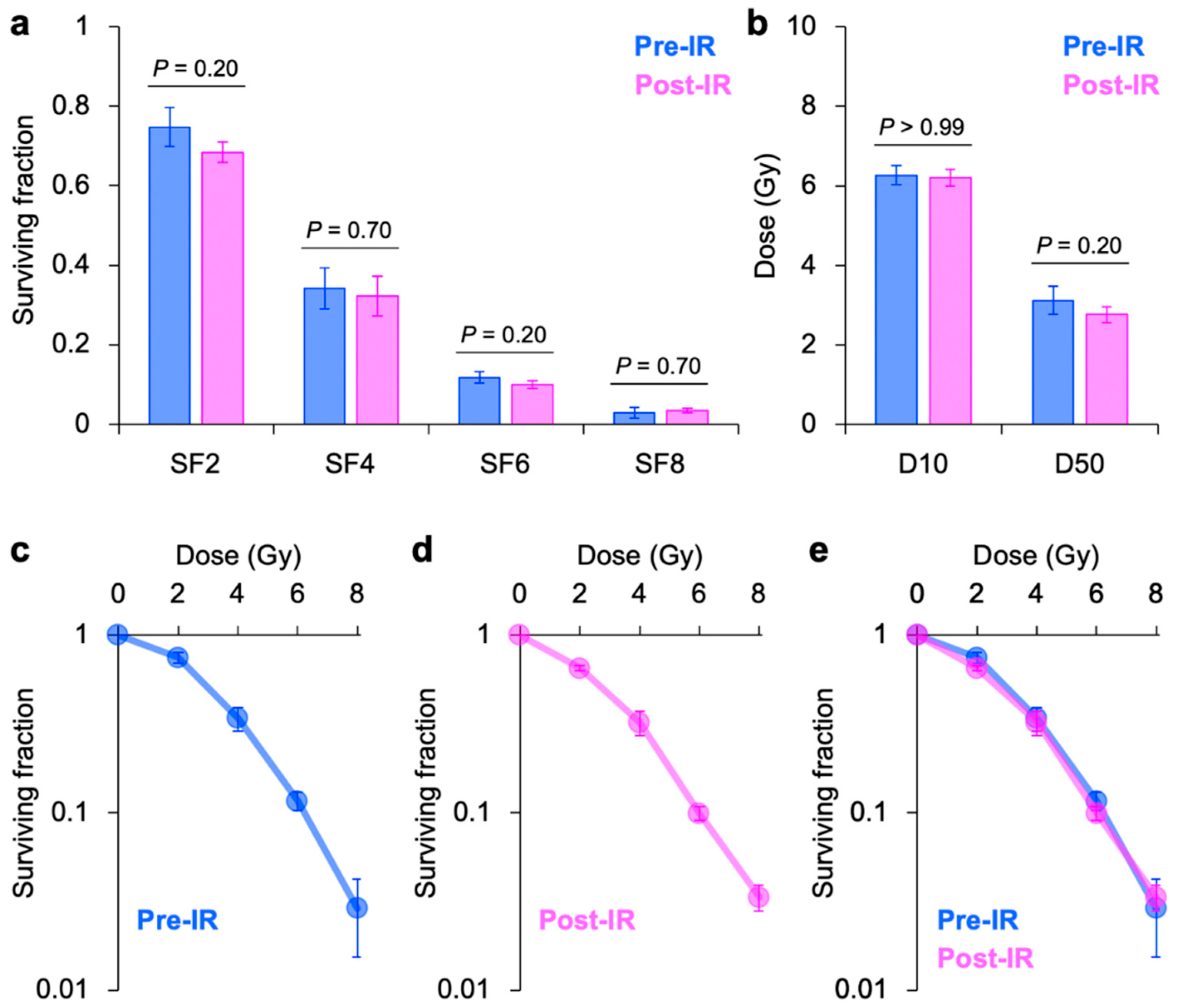 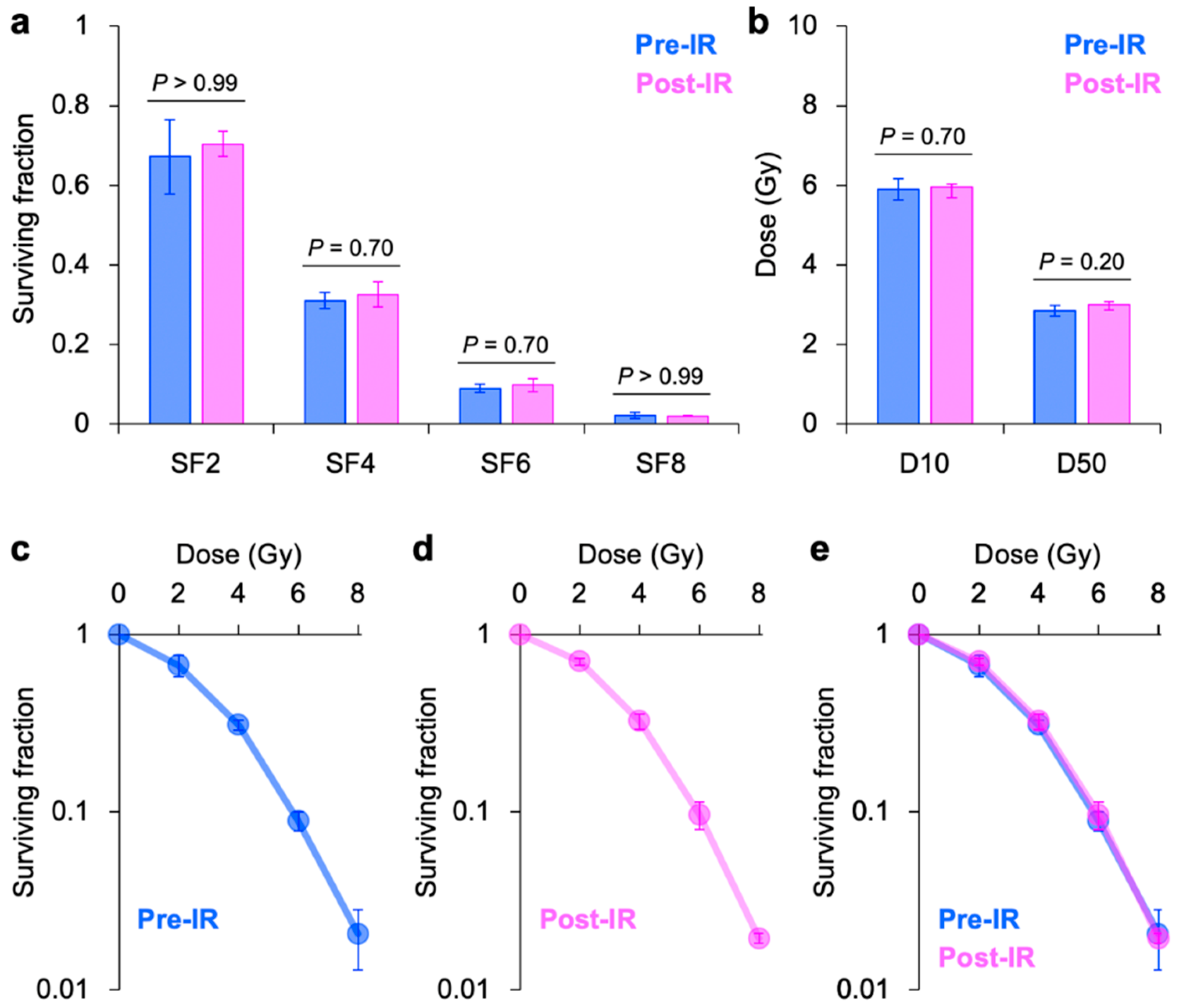