Update Review about Metabolic Myopathies
Next Article in Special Issue

Defining Lyfe in the Universe: From Three Privileged Functions to Four Pillars

Motivated by the need to paint a more general picture of what life is—and could be—with respect to the rest of the phenomena of the universe, we propose a new vocabulary for astrobiological research. Lyfe is defined as any system that fulfills all four processes of the living state, namely: dissipation, autocatalysis, homeostasis, and learning. Life is defined as the instance of lyfe that we are familiar with on Earth, one that uses a specific organometallic molecular toolbox to record information about its environment and achieve dynamical order by dissipating certain planetary disequilibria. This new classification system allows the astrobiological community to more clearly define the questions that propel their research—e.g., whether they are developing a historical narrative to explain the origin of life (on Earth), or a universal narrative for the emergence of lyfe, or whether they are seeking signs of life specifically, or lyfe at large across the universe. While the concept of “life as we don’t know it” is not new, the four pillars of lyfe offer a novel perspective on the living state that is indifferent to the particular components that might produce it. View Full-Text
Keywords: definition of life; origin of life; astrobiology; mechanotroph definition of life; origin of life; astrobiology; mechanotroph
►▼ Show Figures 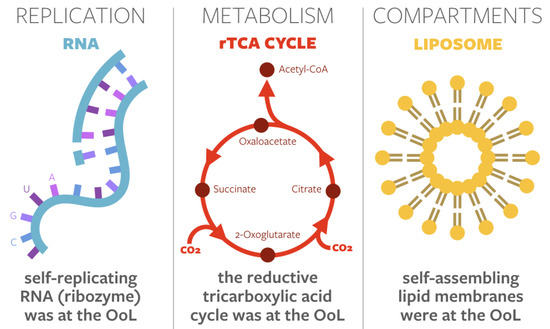