A Theoretical Approach for the Electrochemical Characterization of Ciliary Epithelium

A Strategy for Combinatorial Cavity Design in De Novo Proteins

Protein sequence space is vast; nature uses only an infinitesimal fraction of possible sequences to sustain life. Are there solutions to biological problems other than those provided by nature? Can we create artificial proteins that sustain life? To investigate these questions, we have created combinatorial collections, or libraries, of novel sequences with no homology to those found in living organisms. Previously designed libraries contained numerous functional proteins. However, they often formed dynamic, rather than well-ordered structures, which complicated structural and mechanistic characterization. To address this challenge, we describe the development of new libraries based on the de novo protein S-824, a 4-helix bundle with a very stable 3-dimensional structure. Distinct from previous libraries, we targeted variability to a specific region of the protein, seeking to create potential functional sites. By characterizing variant proteins from this library, we demonstrate that the S-824 scaffold tolerates diverse amino acid substitutions in a putative cavity, including buried polar residues suitable for catalysis. We designed and created a DNA library encoding 1.7 × 106 unique protein sequences. This new library of stable de novo α-helical proteins is well suited for screens and selections for a range of functional activities in vitro and in vivo. View Full-Text
Keywords: protein design; binary patterned amino acid sequences; four helix bundle; synthetic biology; de novo protein design; binary patterned amino acid sequences; four helix bundle; synthetic biology; de novo
►▼ Show Figures 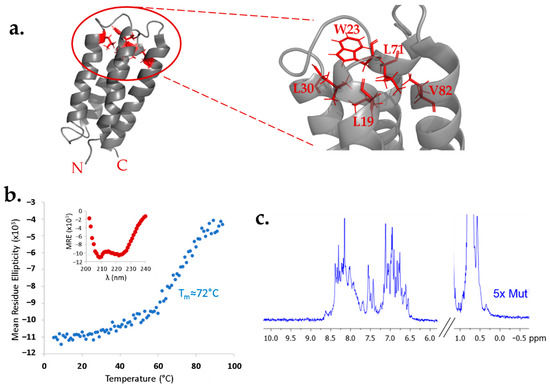