Rapid Transcriptional Reprogramming Triggered by Alteration of the Carbon/Nitrogen Balance Has an Impact on Energy Metabolism in Nostoc sp. PCC 7120
Previous Article in Special Issue

During a space mission, astronauts are inevitably exposed to space radiation, mainly composed of the particles having high values of linear energy transfer (LET), such as protons, helium nuclei, and other heavier ions. Those high-LET particles could induce severer health damages than low-LET particles such as photons and electrons. While it is known that the biological effectiveness of a specified type of radiation depends on the distribution of dose in time, type of the cell, and the biological endpoint in respect, there are still large uncertainties regarding the effects of high-LET particles on the reproductive system, gamete, embryo, and fetal development because of the limitation of relevant data from epidemiological and experimental studies. To safely achieve the planned deep space missions to the moon and Mars that would involve young astronauts having reproductive functions, it is crucial to know exactly the relevant radiological effects, such as infertility of the parent and various diseases of the child, and then to conduct proper countermeasures. Thus, in this review, the authors present currently available information regarding the relative biological effectiveness (RBE) of high-LET particles on the deterministic effects related to the reproductive system and embryonic/fetal development for further discussions about the safety of being pregnant after or during a long-term interplanetary mission. View Full-Text
Keywords: space radiation; high LET; relative biological effectiveness (RBE); reproductive system; embryo; fetus; deterministic effect space radiation; high LET; relative biological effectiveness (RBE); reproductive system; embryo; fetus; deterministic effect
►▼ Show Figures 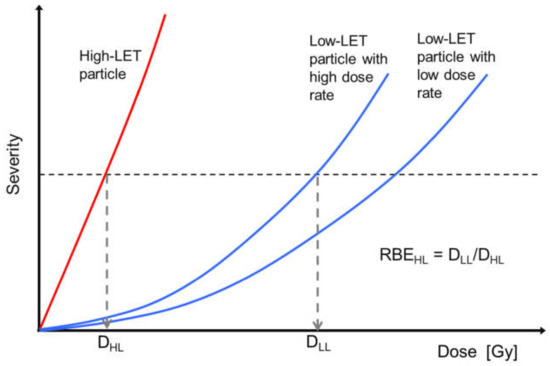