Rapid Transcriptional Reprogramming Triggered by Alteration of the Carbon/Nitrogen Balance Has an Impact on Energy Metabolism in Nostoc sp. PCC 7120

Nostoc (Anabaena) sp. PCC 7120 is a filamentous cyanobacterial species that fixes N2 to nitrogenous compounds using specialised heterocyst cells. Changes in the intracellular ratio of carbon to nitrogen (C/N balance) is known to trigger major transcriptional reprogramming of the cell, including initiating the differentiation of vegetative cells to heterocysts. Substantial transcriptional analysis has been performed on Nostoc sp. PCC 7120 during N stepdown (low to high C/N), but not during C stepdown (high to low C/N). In the current study, we shifted the metabolic balance of Nostoc sp. PCC 7120 cultures grown at 3% CO2 by introducing them to atmospheric conditions containing 0.04% CO2 for 1 h, after which the changes in gene expression were measured using RNAseq transcriptomics. This analysis revealed strong upregulation of carbon uptake, while nitrogen uptake and metabolism and early stages of heterocyst development were downregulated in response to the shift to low CO2. Furthermore, gene expression changes revealed a decrease in photosynthetic electron transport and increased photoprotection and reactive oxygen metabolism, as well a decrease in iron uptake and metabolism. Differential gene expression was largely attributed to change in the abundances of the metabolites 2-phosphoglycolate and 2-oxoglutarate, which signal a rapid shift from fluent photoassimilation to glycolytic metabolism of carbon after transition to low CO2. This work shows that the C/N balance in Nostoc sp. PCC 7120 rapidly adjusts the metabolic strategy through transcriptional reprogramming, enabling survival in the fluctuating environment. View Full-Text
Keywords: cyanobacteria; Nostoc sp. PCC 7120; transcriptomics; photosynthesis; carbon/nitrogen cyanobacteria; Nostoc sp. PCC 7120; transcriptomics; photosynthesis; carbon/nitrogen
►▼ Show Figures 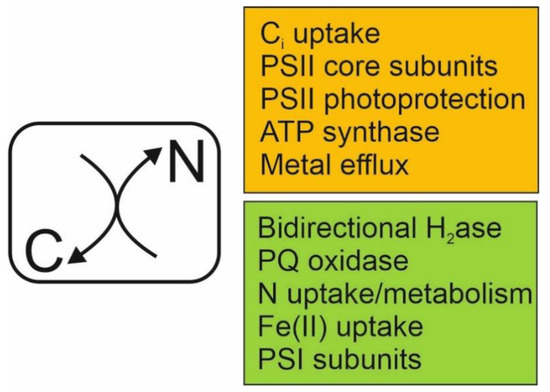