With mining of seafloor massive sulfides (SMS) coming closer to reality, it is vital that we have a good understanding of the geochemistry of these occurrences and the potential toxicity impact associated with mining them. In this study, SMS samples from seven hydrothermal fields from various tectonic settings were investigated by in-situ microanalysis (electron microprobe (EMPA) and laser ablation inductively coupled plasma mass spectrometry (LA-ICP-MS)) to highlight the distribution of potentially-toxic trace elements (Cu, Zn, Pb, Mn, Cd, As, Sb, Co, Ni, Bi, Ag and Hg) within the deposits, their minerals and textures. We demonstrate that a combination of mineralogy, trace element composition and texture characterisation of SMS from various geotectonic settings, when considered along with our current knowledge of oxidation rates and galvanic coupling, can be used to predict potential toxicity of deposit types and individual samples and highlight which may be of environmental concern. Although we cannot quantify toxicity, we observe that arc-related sulfide deposits have a high potential toxicity when compared with deposits from other tectonic settings based on their genetic association of a wide range of potentially toxic metals (As, Sb, Pb, Hg, Ag and Bi) that are incorporated into more reactive sulfosalts, galena and Fe-rich sphalerite. Thus, deposits such as these require special care when considered as mining targets. In contrast, the exclusive concern of ultra-mafic deposits is Cu, present in abundant, albeit less reactive chalcopyrite, but largely barren of other metals such as As, Pb, Sb, Cd and Hg. Whilst geological setting does dictate metal endowment, ultimately mineralogy is the largest control of trace element distribution and subsequent potential toxicity. Deposits containing abundant pyrrhotite (high-temperature deposits) and Fe-rich sphalerite (ubiquitous to all SMS deposits) as well as deposits with abundant colloform textures also pose a higher risk. This type of study can be combined with “bulk lethal toxicity” assessments and used throughout the stages of a mining project to help guide prospecting and legislation, focus exploitation and minimise environmental impact. View Full-Text
Keywords: sulfide geochemistry; SMS; LA-ICP-MS; trace elements; seafloor mining; environment; toxicity; oxidation; leaching sulfide geochemistry; SMS; LA-ICP-MS; trace elements; seafloor mining; environment; toxicity; oxidation; leaching
►▼ Show Figures 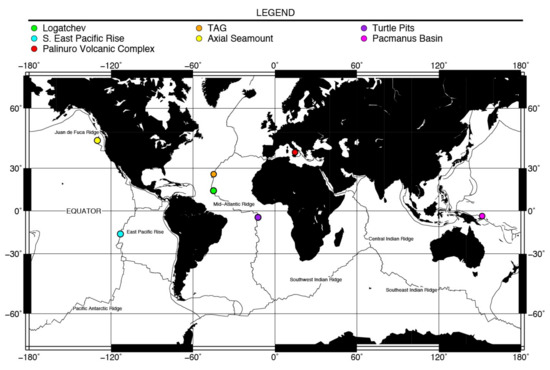