“Zero-Waste”: A Sustainable Approach on Pyrometallurgical Processing of Manganese Nodule Slags
Next Article in Special Issue

Copper-Containing Magnesioferrite in Vesicular Trachyandesite in a Lava Tube from the 2012–2013 Eruption of the Tolbachik Volcano, Kamchatka, Russia

Is Cr-Spinel Geochemistry Enough for Solving the Provenance Dilemma? Case Study from the Palaeogene Sandstones of the Western Carpathians (Eastern Slovakia)

The provenance of the Proč and Strihovce sandstones is crucial for understanding the relationship between the Pieniny Klippen (PKB) and Flysch (FB) belts in the easternmost part of the Western Carpathian realm. Detrital Cr-spinels in these tectonic units were assertively interpreted as sourced from the southern sources representing the Meliata mélange. In this study, we use the geochemistry of detrital chromian spinels to identify the mafic and ultramafic source of the sediments and to compare them each other. Simultaneously, we compare their chemical compositions with those from the different Western Carpathian geological units, which could feed the Proč and Krynica basins during the Paleogene, where the Proč and Strihovce formations (fms), respectively, were deposited. Chromian spinels from the Proč and Strihovce fms exhibit similar geochemical characteristics (Cr# = 0.44–0.88 and 0.29–0.89, Mg# = 0.17–0.68 and 0.2–0.72, TiO2 = 0.0–3.67 and 0.01–2.08 wt.%, respectively). The spinels show both supra-subduction zone (SSZ) peridotite signatures and volcanic origin. Whereas volcanic spinels from the Proč Formation (Fm.) were formed under an ocean island basalt (OIB) and back-arc basin basalt (BABB) geodynamic setting, those from the Strihovce Fm. suggest a predominantly mid-ocean ridge basalt (MORB) origin. To avoid mistakes in the provenance interpretations, the data from garnet geochemistry of both formations is supplied. The analysed Cr-spinels do not absolutely overlap with spinels reported from the Meliata Unit, and their composition indicates at least two independent sources. View Full-Text
Keywords: Cr-spinel; garnet; geochemistry; provenance; Pieniny Klippen Belt; Magura Unit; Western Carpathians Cr-spinel; garnet; geochemistry; provenance; Pieniny Klippen Belt; Magura Unit; Western Carpathians
►▼ Show Figures 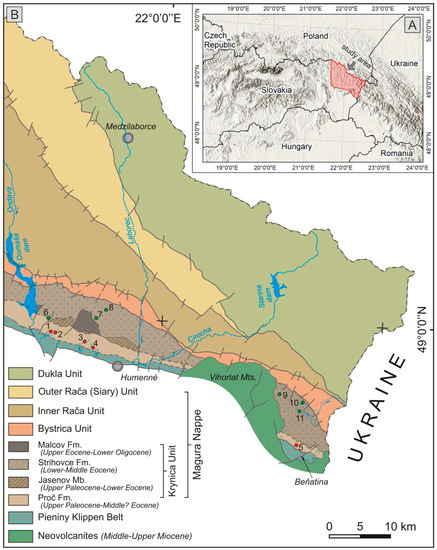