Sr-Nd-Pb-Ca Isotopes of Holocene Basalts from Jingpohu, NE China: Implications for the Origin of Their Enriched Mantle Signatures

The geochemistry on Holocene lavas from the Jingpohu volcanic field in NE China are compared with other Cenozoic lavas from across the back-arc rift of NE China, in order to constrain their enriched mantle sources. Holocene lavas within Jingpohu volcanic field comprise two separate “Crater Forest” (CF) and “Frog Pool” (FP) volcanic areas. FP lavas have lower MgO, CaO, and heavy rare earth elements and higher Al2O3, Na2O, K2O, and large-ion lithophile elements than CF lavas. Yet, both CF and FP lavas share similar isotopic signatures, with depleted Sr and Nd isotopes (87Sr/86Sr = 0.703915–0.704556, 143Nd/144Nd = 0.512656–0.512849) and unradiogenic Pb isotopes (208Pb/204Pb = 37.79–38.06, 207Pb/204Pb = 15.45–15.54, 206Pb/204Pb = 17.49–18.15), similar to oceanic island basalts. An important new constraint for the Jingpohu lavas lies in their Ca isotopes of δ44/40Ca from 0.63‰ to 0.77‰, which are lower than that of the bulk silicate earth (0.94 ± 0.05‰). By comparing the isotopic signatures of sodic lavas with that of the potassic lavas across NE China, we propose a three-component mixing model as the source for the sodic lavas. In consistence with geophysical results, we propose that subducting Pacific plate induces asthenospheric mantle upwelling of an upper depleted mantle (DM), including subducted ancient sediments (EM I), which partially melted upon ascent. These primary melts further interacted with the lithospheric mantle (EM II), before differentiating within crustal magma chambers and erupting. View Full-Text
Keywords: Jingpohu volcano; EM I; EM II; Ca isotope; Pacific plate Jingpohu volcano; EM I; EM II; Ca isotope; Pacific plate
►▼ Show Figures 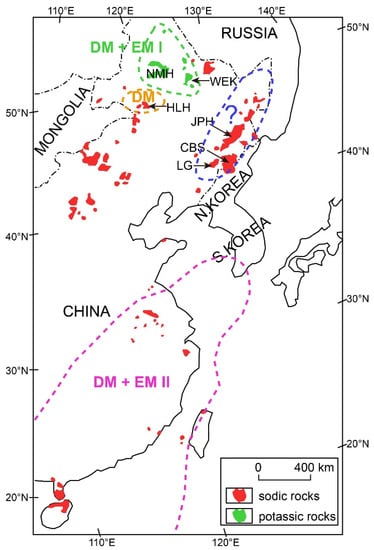