Side orientation of cells is usually ambiguous in unicellular organisms, making it impossible to separate components of directional asymmetry (DA) and fluctuating asymmetry (FA). However, frustules of the diatom Luticola poulickovae have biradially symmetric outlines, and their central areas bear ornamentation that is asymmetric across the apical axis. The goal of this study was to explore differentiation of morphometric asymmetry across the apical axis into DA and FA components. Is there detectable DA of the valve outlines of two L. poulickovae strains that may be related to the asymmetric central areas? Given that the life cycle of diatoms involves cell-size diminution, and cell shape is strongly affected by allometry, we also explored the question of whether asymmetry is correlated with cell size. The extent of symmetric variation among individuals in each strain, as well as DA and FA across the apical axis, were quantified using two Procrustes ANOVA models. The results revealed no correlation of either total asymmetry or FA with valve size. DA was significant and considerably more pronounced than FA in both strains, indicating that there is previously unknown systematic asymmetry of valve outlines of L. poulickovae, which may be related to the asymmetry of its central area. View Full-Text
Keywords: biradial symmetry; fluctuating asymmetry; directional asymmetry; diatoms; frustule biradial symmetry; fluctuating asymmetry; directional asymmetry; diatoms; frustule
►▼ Show Figures 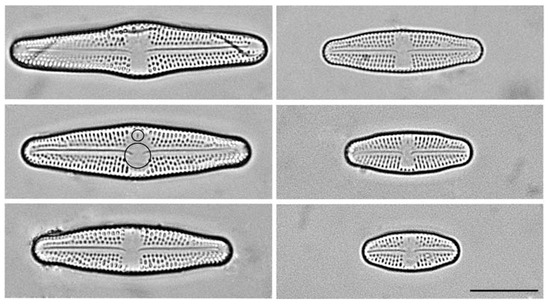