A Time-Motion Analysis of the Cross-Over Step Block Technique in Volleyball: Non-Linear and Asymmetric Performances

Asymmetries in Football: The Pass—Goal Paradox

We investigate the relation between the number of passes made by a football team and the number of goals. We analyze the 380 matches of a complete season of the Spanish national league “LaLiga" (2018/2019). We observe how the number of scored goals is positively correlated with the number of passes made by a team. In this way, teams on the top (bottom) of the ranking at the end of the season make more (less) passes than the rest of the teams. However, we observe a strong asymmetry when the analysis is made depending on the part of the match. Interestingly, fewer passes are made in the second half of a match, while, at the same time, more goals are scored. This paradox appears in the majority of teams, and it is independent of the number of passes made. These results confirm that goals in the first half of matches are more “costly” in terms of passes than those scored in second halves. View Full-Text
Keywords: football; team performance; goals; passes; paradox football; team performance; goals; passes; paradox
►▼ Show Figures 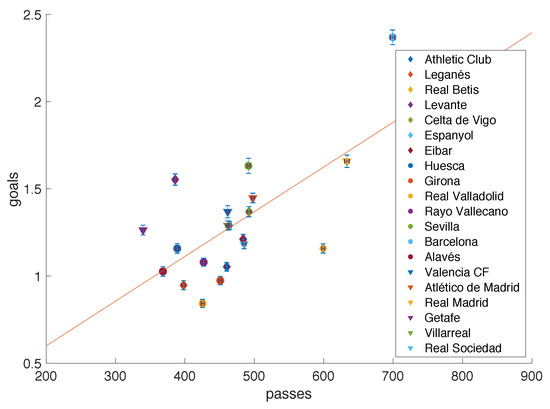