Rainy, as an inevitable weather condition, will affect the acquired image. To solve this problem, a single image rain removal algorithm based on deep learning and symmetric transformation is proposed. Because of the important characteristics of wavelet transform, such as symmetry, orthogonality, flexibility and limited support, wavelet transform is used to remove rain from a single image. The image is denoised by using wavelet decomposition, threshold value and wavelet reconstruction in wavelet transform, and the rain drop image is transformed from RGB space to YUV (luma chroma) space by using deep learning to obtain the brightness component and color component of the image. the brightness component and residual component of the raindrop source image and the ideal recovered image without raindrop are extracted. The residual image and brightness component are overlapped again, the reconstructed image is restored to RGB space by YUV inverse transformation, and the final color raindrop free image is obtained. After training the network, the optimal parameters of the network are obtained, and finally the convolution neural network which can effectively remove the rain line is obtained. Experimental results show that compared with other algorithms, the proposed algorithm achieves the highest value in both peak signal-to-noise ratio (PSNR) and structural similarity, which shows that the image effect of the algorithm is better after rain removal. View Full-Text
Keywords: deep learning; wavelet transform; image; rain removal algorithm; very deep network; SNR deep learning; wavelet transform; image; rain removal algorithm; very deep network; SNR
►▼ Show Figures 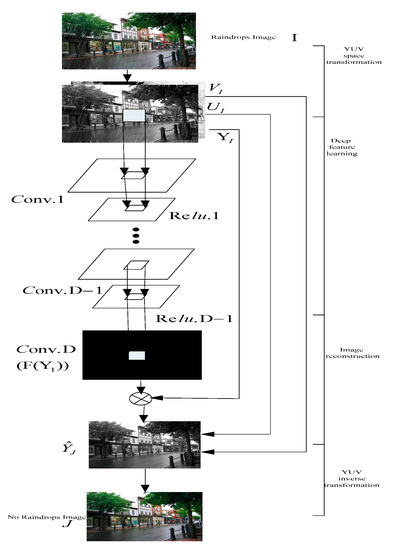