New approaches to collect in-situ data are needed to complement the high spatial (10 m) and temporal (5 d) resolution of Copernicus Sentinel satellite observations. Making sense of Sentinel observations requires high quality and timely in-situ data for training and validation. Classical ground truth collection is expensive, lacks scale, fails to exploit opportunities for automation, and is prone to sampling error. Here we evaluate the potential contribution of opportunistically exploiting crowdsourced street-level imagery to collect massive high-quality in-situ data in the context of crop monitoring. This study assesses this potential by answering two questions: (1) what is the spatial availability of these images across the European Union (EU), and (2) can these images be transformed to useful data? To answer the first question, we evaluated the EU availability of street-level images on Mapillary—the largest open-access platform for such images—against the Land Use and land Cover Area frame Survey (LUCAS) 2018, a systematic surveyed sampling of 337,031 points. For 37.78% of the LUCAS points a crowdsourced image is available within a 2 km buffer, with a mean distance of 816.11 m. We estimate that 9.44% of the EU territory has a crowdsourced image within 300 m from a LUCAS point, illustrating the huge potential of crowdsourcing as a complementary sampling tool. After artificial and built up (63.14%), and inland water (43.67%) land cover classes, arable land has the highest availability at 40.78%. To answer the second question, we focus on identifying crops at parcel level using all 13.6 million Mapillary images collected in the Netherlands. Only 1.9% of the contributors generated 75.15% of the images. A procedure was developed to select and harvest the pictures potentially best suited to identify crops using the geometries of 785,710 Dutch parcels and the pictures’ meta-data such as camera orientation and focal length. Availability of crowdsourced imagery looking at parcels was assessed for eight different crop groups with the 2017 parcel level declarations. Parcel revisits during the growing season allowed to track crop growth. Examples illustrate the capacity to recognize crops and their phenological development on crowdsourced street-level imagery. Consecutive images taken during the same capture track allow selecting the image with the best unobstructed view. In the future, dedicated crop capture tasks can improve image quality and expand coverage in rural areas. View Full-Text
Keywords: crowdsourcing; citizen science; agriculture; street-view; in-situ; LUCAS; Copernicus crowdsourcing; citizen science; agriculture; street-view; in-situ; LUCAS; Copernicus
►▼ Show Figures 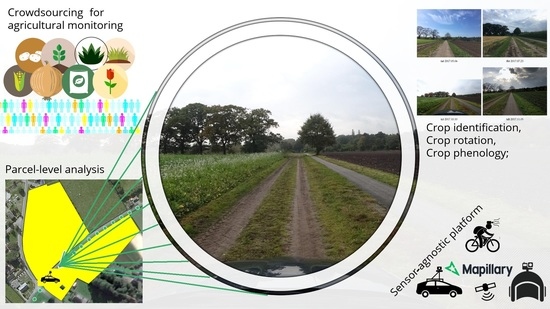