A Regional Perspective on Urbanization and Climate-Related Disasters in the Northern Coastal Region of Central Java, Indonesia
Next Article in Special Issue

The Uneven Influence of Climate Trends and Agricultural Policies on Maize Production in the Yucatan Peninsula, Mexico
Previous Article in Journal

Urban sprawl is a concept commonly used to describe the physical expansion of urban areas. It is traditionally associated with lower residential density, poorer connectivity, and higher energy costs for heating and transport. From the period of 1980 to 2000, the extent of the built-up area in Europe has increased at a rate three times higher than that of population increase, and urban sprawl is now recognized as a major challenge. However, for policies to address this issue, it is essential to be able to identify and quantify sprawl. Yet, there is no internationally agreed upon definition of what constitutes sprawl, nor is there an agreed upon methodology on how to measure and define it in a quantitative manner. This paper describes an attempt at characterizing urban sprawl across urban areas at a pan European scale by presenting a new indicator, the Averaged Concentric Weighted Urban Proliferation (ACWUP) index. This index is calculated by aggregating the “sprawl profile” of urban areas, derived from an adapted version of the Weighted Urban Proliferation (WUP) index and applied to EU28-wide, 100 m resolution gridded population and land-use data. In comparison to other approaches, the proposed indicator (1) is data cheap and quick to produce, and (2) provides a unique synthetic value that characterizes the sprawl status of individual cities. We believe this indicator and its associated sprawl profile could be used as a first-pass approximation that characterizes and compares urban sprawl across cities. View Full-Text
Keywords: urban sprawl; weighted urban proliferation; cities; EU28; urban form; LUISA urban sprawl; weighted urban proliferation; cities; EU28; urban form; LUISA
►▼ Show Figures 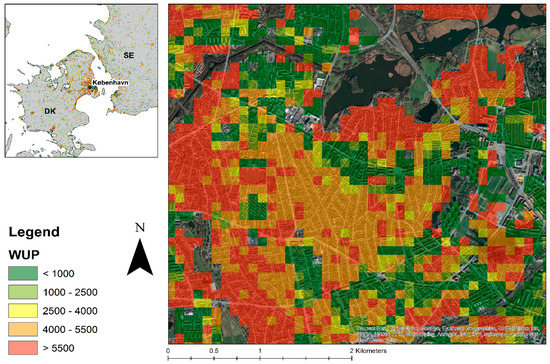 
Aurambout, Jean-Philippe; Barranco, Ricardo; Lavalle, Carlo. 2018. "Towards a Simpler Characterization of Urban Sprawl across Urban Areas in Europe." Land 7, no. 1: 33.