Land Use and Land Cover Changes and Their Effects on the Landscape of Abaya-Chamo Basin, Southern Ethiopia

This study assessed forest cover change from 1985 to 2016, analyzed community perception on forest cover change and its drivers, and suggested possible solutions in northern Ethiopia. Landsat images of 1985, 2000 and 2016, household interviews and focus group discussions were used. While dense forests and open forests increased by 8.2% and 32.3% respectively between 1985 and 2000, they decreased by 10.4% and 9.8% respectively from 2000 to 2016. Grasslands and cultivated land decreased in the first period by 37.3% and 5.5% but increased in the second period by 89.5% and 28.5% respectively. Fuel wood collection, cultivated land expansion, population growth; free grazing, logging for income generation and drought were the major drivers of the change reported by local communities. Soil erosion, reduction in honey bee production, flooding and drought were the most perceived impacts of the changes. Most of the farmers have a holistic understanding of forest cover change. Strengthening of forest protection, improving soil and water conservation, enrichment planting, awareness creation, payment for ecosystem services and zero grazing campaigns were mentioned as possible solutions to the current state of deforestation. In addition, concerted efforts of conservation will ensure that the forests’ ecosystems contribute to increased ecosystem services. View Full-Text
Keywords: forest cover change; perception; remote sensing; drivers; Ethiopia forest cover change; perception; remote sensing; drivers; Ethiopia
►▼ Show Figures 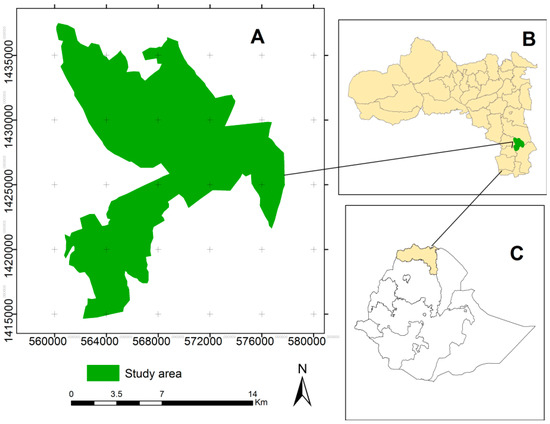