Chiefs in a Democracy: A Case Study of the ‘New’ Systems of Regulating Firewood Harvesting in Post-Apartheid South Africa
Previous Article in Journal

A Regional Perspective on Urbanization and Climate-Related Disasters in the Northern Coastal Region of Central Java, Indonesia

Indonesia, as an archipelagic nation, has about 150 million people (60%) living in coastal areas. Such communities are increasingly vulnerable to the effects of change, in the form of sea level rise and stronger, more intense storms. Population growth in coastal areas will also increase the disaster risk mainly because of climate change-related effects such as flooding, droughts, and tidal floods. This study examines the dynamic changes of urban population and urban villages in three decadal periods, from 1990, 2000, to 2010. To highlight different disasters that are increasingly tied to climate change, the analysis was conducted in the northern coastal area of Central Java province using village potential (PODES) data, which are routinely collected by the government. Results show that about 41% of people in Central Java province live in the northern coastal region and 50% live in urban areas. The numbers of hazard events within a distance range of 0–40 km from the shoreline are: flooding (non-tidal)—335; tidal flooding—65; and droughts—28. Based on this study, about half of flood disasters (non-tidal) occurred within 10 km of the shoreline, while tidal flooding accounted for 80%. Most of the climate-related disasters were found in rural areas at low levels of population growth, while in urban areas the disasters were found to be associated in less than 1% and in more than 3% of population growth. View Full-Text
Keywords: population growth; climate-related disasters; hazard events; northern coast of Central Java population growth; climate-related disasters; hazard events; northern coast of Central Java
►▼ Show Figures 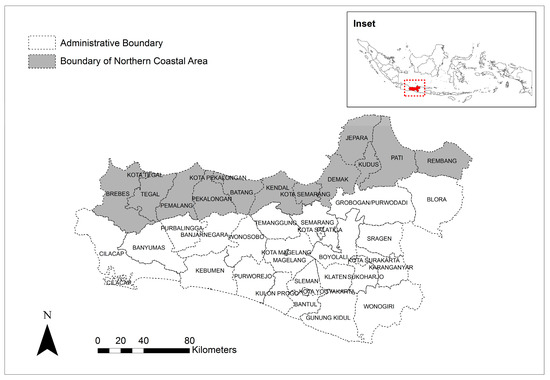